Waitaki residents have had their say on the future of Forrester Heights in large numbers.

When the Waitaki District Council closed its one-and-a-half-month consultation period on Monday, it had received more than 900 submissions. About 80 groups and individuals have indicated they would like to speak to their submissions at council hearings, which have been scheduled for May 30-31, with the possibility of more days being added. 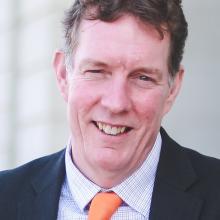 Alex Parmley.
Chief executive Alex Parmley said the large number of submissions, supporting material and requests to speak at council hearings would all take time for council officers and elected members to work through.

"At the same time, having such a large amount of submitters is a good problem to have, as it is good to see residents engaging in the work and decision-making of the council," Mr Parmley said.

He thanked everyone who took the time to make a submission.

"These responses will now form a vital piece of the consideration for council in arriving at a final decision on the best use of this land for the community."

The council gave the community three options to consider for the future of the 2.51ha of land overlooking Oamaru Harbour known as Forrester Heights: turning all or some of it into a reserve; selling some or all of it, using the funds for community benefit; or leaving it as is.

When asked for a breakdown of numbers supporting each option, a council spokeswoman said submissions were still being processed.

The land is zoned residential and classified as "endowment" land, given to the council to generate funds for the benefit of the community. In the consultation process, the council also sought feedback on how money could be spent, if the land was sold. Options included repaying debt, putting the funds towards a new facility such as the Waitaki Event Centre, or creating a new reserve.

Waitaki Mayor Gary Kircher said balancing the "numerous conflicting viewpoints" would be difficult, as councillors also needed to take into account the interests and challenges for the wider Waitaki district.

"However, I believe that councillors are committed to making a decision on the land that they determine is the right one for the community," Mr Kircher said.

"Regardless of whether that decision is in agreement or not with each individual submission, submitters can be assured that we have listened to all of the views expressed."

After council hearings, councillors will decide on what the next steps will be towards a final decision, including the timing for any further reports.