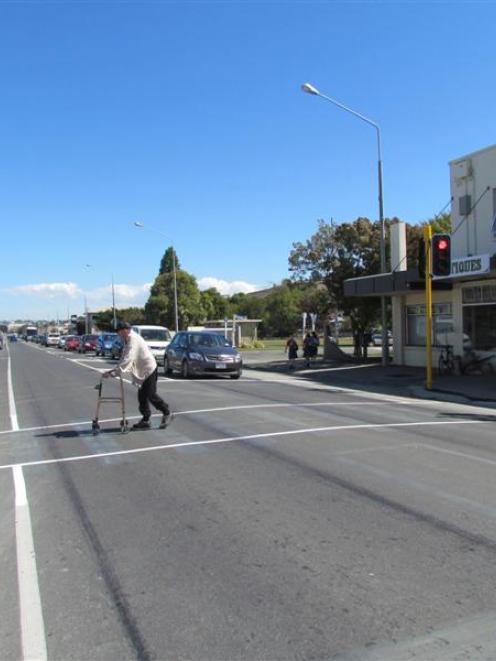 Jim Fraser, with his walking frame, uses the Oamaru north end pedestrian crossing on Thames St earlier this year. Photo by David Bruce.
The Waitaki District Council wants a fresh look taken at traffic issues on State Highway 1 in the north end business area of Oamaru, but the New Zealand Transport Agency wants time for the effects of new pedestrian crossing lights to settle down.

As part of public submissions on the council's 10-year long-term plan, some people commented on traffic issues in north Oamaru, including around the business area and at intersections with SH1.

In light of that the council has decided to ask the agency to refresh a traffic study it carried out in 2008, in particularly looking at realigning the Frome St and Caledonian Rd intersections with SH1.

The original study was a full assessment of SH1-Thames Highway from Orwell St to the Oamaru boundary.

After a cost/benefit analysis, no further work was done.

When the agency was planning to install the pedestrian lights, North End business owners protested, pointing out the loss of parking.

Waitaki MP Jacqui Dean organised a meeting between the agency and businesses, which resolved issues.

At that time, the agency said it would update the strategic study once the lights were in action.

Since then, there had been criticism of the effect the pedestrian lights were having on traffic, particularly blocking intersections where cars were stopping for the lights.

The Otago Daily Times recently asked the agency when the study would be done and its journey manager Graeme Hall said time was needed for the pedestrian lights to embed in for a minimum of six months before carrying out any review or study on that part of the highway.

''Until then, we will continue monitoring the site and make adjustments,'' he said.