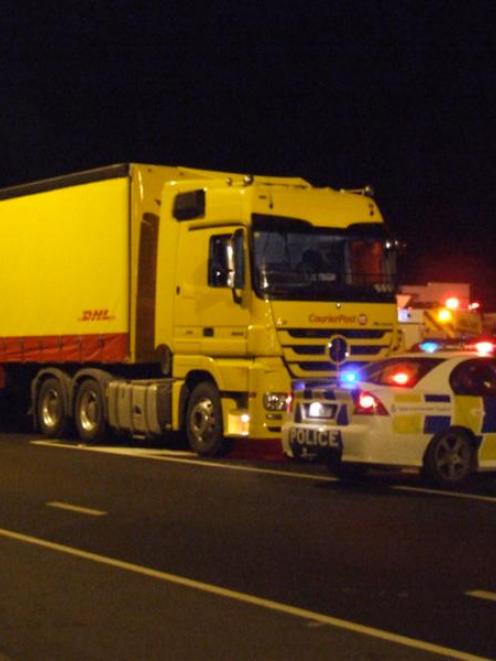 Madeleine Horn (18), who is in the intensive care unit, and Ema McGeown (21), who received moderate injuries, were hit by the south-bound CourierPost truck about 2.50am, between Forth and Don Sts, near the A and P showgrounds.

Sergeant Wayne Brew said the truck and semi-trailer was heading from Christchurch to Dunedin when the driver, a 54-year-old Dunedin man, saw the two young women come out on to the road.

He attempted to avoid them by braking and steering into the northbound lane.

There was an oncoming truck so he was limited with space, Sgt Brew said.

Both women were taken by ambulance to Oamaru Hospital and Miss Horn was later flown to Dunedin by Otago Regional Rescue Helicopter.

Miss McGeown, who was believed to have leg fractures, was taken by road to Dunedin Hospital.

Miss McGeown was in a stable condition last night, a hospital spokesman said.

A diversion was in place for motorists until about noon on Saturday and the police serious crash unit, commercial vehicle investigation unit and a vehicle examiner attended the collision site.

The truck driver's employer uplifted the truck once it was released by police and the driver returned home by car.

While alcohol and speed were not factors as far as the truck driver was concerned, alcohol was believed to be a factor with the young women.