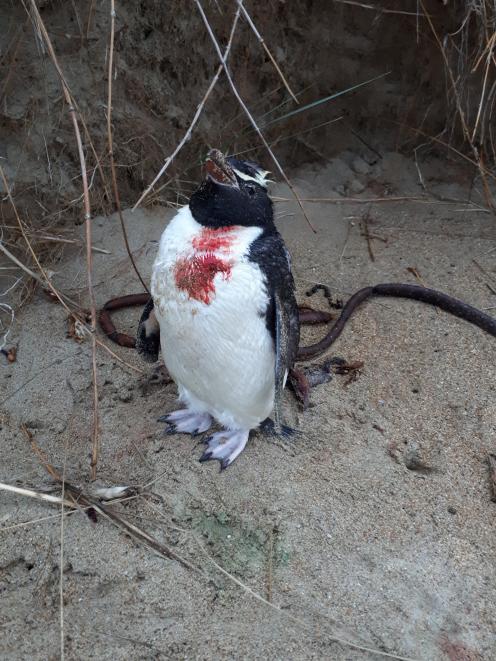 The moulting Snares crested penguin at Kakanui after the dog attack on January 18. It was sent to Dunedin's wildlife hospital but died. Photo: Supplied
A dog has attacked and killed a rare penguin visitor to the southeast coast.

The Department of Conservation was called out to Kakanui, in North Otago, after a member of the public saw an injured, moulting Snares crested penguin on the beach about halfway between Campbells Bay and All Day Bay on January 18.

Oamaru Doc field ranger Tom Waterhouse said ''there was no-one around'' when he went to pick up the bird and ''no-one had seen anything''.

But the endemic, but naturally uncommon, penguin was suffering from visible bleeding puncture wounds.

The bird was sent to Dunedin's wildlife hospital for treatment, but died shortly after arriving.

''More often than not, uncontrolled dogs around penguins results in a lethal outcome. In my experience the internal injuries these birds sustain from dog attacks are usually catastrophic and the external injuries do not show the extent of the damage,'' Dr Argilla said in a Doc statement yesterday.

''Dogs usually shake the bird very violently leading to internal injuries that can cause very slow and painful deaths for the birds.''

Mr Waterhouse said moulting birds, such as the dead Snares crested penguin, were ''particularly vulnerable'' during the two- to three-week moulting period when they replace their feathers all at once.

''They are easily stressed, there's an increased risk of de-hydration and starvation and they cannot escape predators easily.''

Mr Waterhouse urged dog owners to be ''vigilant'' during the moulting season.

''We're not trying to target dog owners,'' he said. ''It's just trying to work with them and reinforce that it is a bit of an issue, because we've got this cool bit of wildlife that comes up and is fairly vulnerable.

''Dog owners are required by law to ensure their dog does not injure, or cause distress to wildlife and other animals, whether the dog's on a lead or running free. Even the most loving or well-behaving dog is capable of hurting or scaring a penguin.''

The Doc website says all sightings of the birds should be reported to the Doc hot line.

The yellow-eyed penguin moulting season was approaching; it ran from late February to mid April.

Dogs again! Inconsiderate owners just never seem to understand the danger of letting them run loose; and it's the same here in Canada.