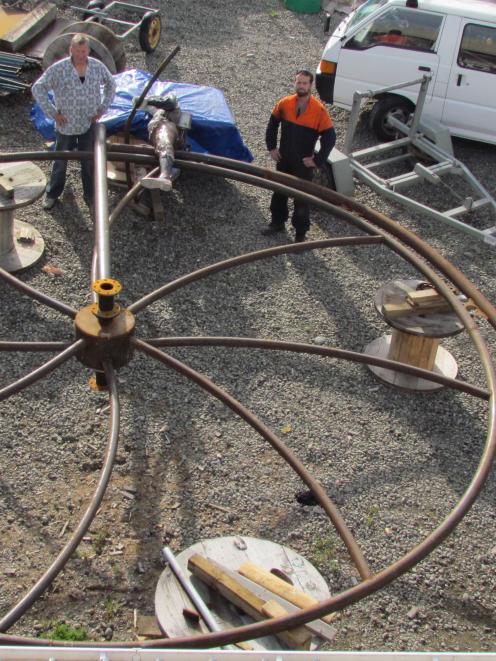 Artist Don Paterson and engineer Brad Scanlan admire their 6m high handiwork at Trafo Power Group, in Oamaru, yesterday. Photo by Ben Guild.
The Friendly Bay playground is set to take on a new look, as a 6m-high swing in the shape of a penny-farthing nears completion.

Trafo Power Group mechanical service manager Peter Gibbons said the structure, which would sport two regular swings, a tyre swing and one juvenile swing, was expected to be finished within the next fortnight.

It will form part of the Steampunk-themed playground, which will also feature a historic steam crane on railway tracks, a refashioned fishing boat, a children's train, a spinning wheel, a flying fox and a life-sized elephant complete with climbing areas and a large cage on its back.

The large moulded steel structure and its accompanying rider, fashioned from fibreglass, marble and resin, were designed by artist Don Paterson, who is also behind the life-sized elephant.

A few design changes had been made along the way to ensure everything fitted properly, Mr Gibbons said.

Trafo Power Group engineer Brad Scanlan, who has been working on the project between other jobs, said the structure had taken 18 men to lift and probably weighed more than one tonne.

The work had taken about two weeks spread out over about two months, he said.

Waitaki District Council corporate services group manager Caroline Carter said the idea was to recycle objects from around the district "to get the history into the harbour".