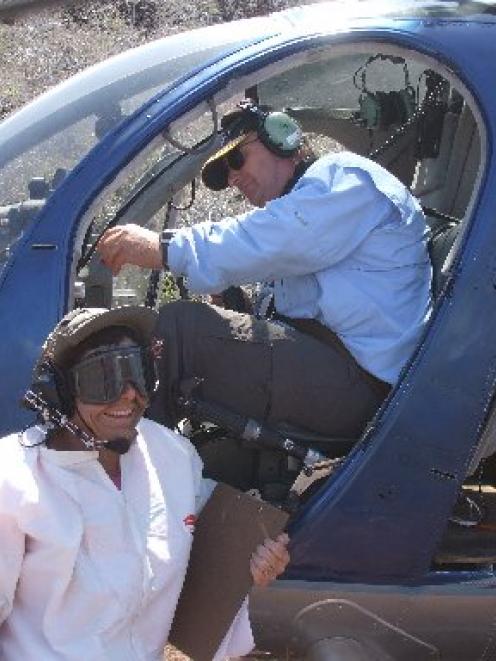 Mr and Mrs Oakes, who own Central South Island Helicopters, were approached to do some work for the Ecuadorian Government, due to their expertise in pest control.

The Galapagos Islands are an archipelago of volcanic islands 1000km off Ecuador's coast and their flora and fauna was studied by Charles Darwin as he developed his theory of evolution.

Invasive rats, which threatened the survival of birds, tortoises, iguanas and native plants, were targeted this month with a spread of bait by helicopter.

It was the first time a bucket application by helicopter had been used there and people were "absolutely astounded" that it could be done, Mr Oakes said.

The project's manager, Victor Carrion, said the rats had placed in serious risk, and on the edge of extinction, the Galapagos petrel, a marine bird, of which only 120 remained.

A total of 50 bird species were endangered by rodents, eight of them critically, as well as giant tortoises, iguanas and a series of plants.

The rats were omnivores and ate whatever they encountered, including eggs.

Mr and Mrs Oakes arrived on January 4 and returned home on Sunday, having treated 10 small islands.

Their work made national news in Ecuador and Mexico.

Mr Oakes, who has been flying helicopters full-time since 1988, described it as the "trip of a lifetime".

They had to do one application and then wait seven days before doing the second application.

Mrs Oakes controlled the worksite and liaised with her husband in the helicopter.

It had long been a dream for her to travel to the islands.

While the work was the same as the company did in New Zealand, the conditions were different, particularly the amount of flying over open water between islands.

The sea life was "unbelievable", he said.

Not only were local people impressed with the method - "they didn't know this could be done" - but tourists were also excited, as they could see the impact of high rat infestation.

The couple were pleased to see people recognise their pest control work as a matter of conservation.

"We are conservationists at heart.

"What we're doing is trying to protect the environment," he said.

There had been a programme in the islands for some time, involving other New Zealanders, eradicating donkeys, goats and pigs.

That had gone well and the focus had moved to the next pest "wrecking" the environment - rats.

A few years ago, it was feared that the damage was irreparable but the landscape was starting to come back.

The exercise showed the "outside world" was very impressed with what was done in New Zealand, both conservation and agriculture wise, Mr Oakes said.

Before the bait drop, scientists performed a rigorous risk analysis on non-target species, such as hawks, finches and mockingbirds, to determine possible effects of the bait on those species.

The study determined the Galapagos hawk was at greatest risk, since hawks could capture and feed on rodents that had consumed the bait.

Twenty hawks were captured and will be kept in captivity until the bait and affected rodents are no longer a risk.