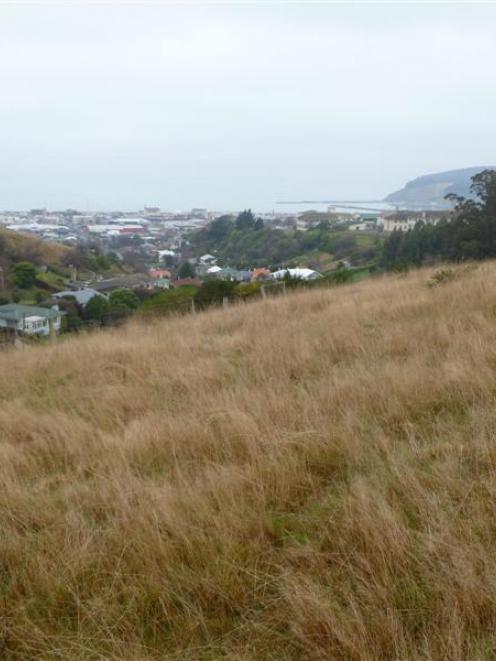 A 2013 photo of part of hospital hill at Oamaru where a retirement village may be built. The sites have views over the town and down to Cape Wanbrow and Oamaru Harbour. Photo by David Bruce.
Waitaki District Health Services has asked for an extension of nine months to an option it has to buy from its owner, the Waitaki District Council, land in Oamaru for a retirement village.

The Observatory Hill residential and retirement village is proposed for land overlooking Oamaru with access off Eden St.

Last year, the council granted the company an option to buy up to about 8ha to build the village - the first stage, costing an estimated $15 million, consisting of 21 villas of up to three bedrooms, 12 apartments, 40 rest-home care beds in individual en suite rooms and a community centre with library, chapel, technology, media and music rooms, fitness suite, gymnasium, hair salon and provision for indoor bowls.

Further stages, depending on demand, include up to 21 villas, 12 apartments and 40 hospital-care beds. Profits would go to health services in the district.

The option was until June 30 this year, but the project is taking longer to evaluate than expected so the company has asked for the option to be extended to March 31 next year, and the settlement date to April 30 next year.

The council will decide at its meeting on Wednesday whether to grant the extension, but its property specialist, Graeme Pointon, has recommended it do so.

Mr Pointon said the council had committed to the concept by originally entering into an agreement granting an option to the company to buy the land, which included a condition of right of first refusal to buy additional land adjoining the site.

Preliminary investigation and design work had been completed and the company had confirmed the project was feasible.

A second stage of site testing and design work had been commissioned and was under way.

The company planned to use reserves and loan finance to build the village, but that could not be confirmed until the second stage was completed, expected to be the end of this year or early next year.

As a result, the company had asked for an extension to the purchase option, but had indicated the additional land was no longer needed.

The company is wholly owned by the council, on behalf of the community, to own and operate Oamaru Hospital and provide health services to the Waitaki district under contract to the Southern District Health Board.