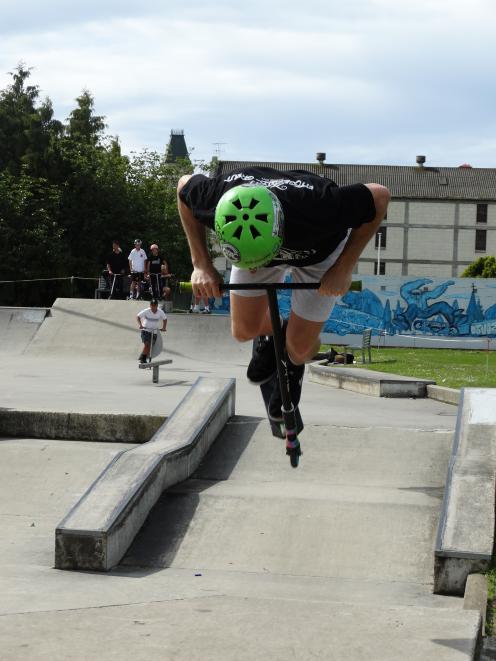 The Wellington-based 20-year-old visited North Otago  to judge the inaugural Oamaru scooter competition at the Oamaru skate park on Saturday. The event was originally scheduled for April, but was postponed because of heavy rain.

On Saturday more than 20 riders from Oamaru and further afield showed their extensive range of tricks across three categories — under-12, under-16 and open.

Fitzgerald-Grout, who also gave a demonstration, said he was impressed with the ability shown by the competitors.

"I’m really surprised with the talent that’s down here. There are some very, very talented riders here and a bigger place to ride would help develop that further.

"It’s [the skate park] actually pretty good for a small town like this. You can definitely make do with this skate park."

Each participant was judged on a one-minute run in the under-12 and under-16 categories and two heats and a final run in the open competition.

The competition was well-supported by the public, along with several groups and organisations and  the police.Fitzgerald-Grout first jumped on a scooter at the age of 10 and has not looked back.

He would love nothing more than to ride full time and get paid for it, but  that was not realistic in New Zealand, he said.

"It’s a job I get a few perks from now and then. I would love to do it for a living, but in New Zealand it’s quite hard to make it a full-time job."

Sergeant Tony Woodbridge, of Oamaru, said the event showed the positives that could come out of the skate park after several violent incidents, including assaults, at the park in the past.

Just last month a rock was thrown from the skate park at a passing train, shattering the locomotive’s window and injuring the driver.

There were some "very talented" scooter riders and skateboarders in Oamaru, and they should be able to feel safe at the skate park, Sgt Woodbridge said.

"We are trying to encourage it to be a safe, friendly, family place and this event is encouraging kids and their families to come back down there and enjoy it because it is a great facility."

A second scooter competition was held in Palmerston yesterday.