Sea of Galilee coming to Otago 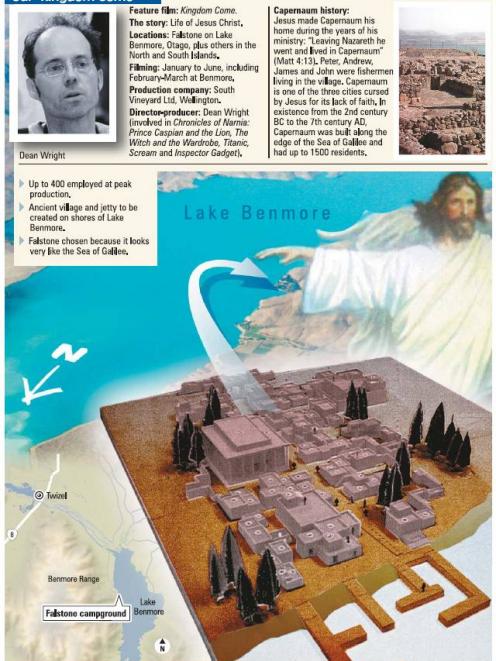 A sea of Galilee fishing village and harbour is coming to the shores of Lake Benmore courtesy of a feature film about the life of Christ.

Filming of the independent film Kingdom Come, which will employ up to 400 people, is scheduled to begin about the middle of February.

Construction of the set is expected to start shortly at the Falstone camping reserve on the lake's Haldon Arm.

The Falstone area and Lake Benmore were chosen by Wellington-based film company, South Vineyard Ltd, after an extensive search throughout New Zealand for a lake environment that best depicted a location on the Sea of Galilee in Israel.

"The outlook from this location provided the closest authenticity to the actual location," according to a resource consent application by South Vineyard to the Waitaki District Council.

It is understood at least one other North Otago site was being considered for the film.

The production is expected to bring major financial benefits for the Waitaki District Council and communities around Lake Benmore.

However, both the council and Waitaki Development Board, which have been working closely with South Vineyard on the project, were tight-lipped yesterday.

The board and council said they could not comment because of a confidentiality clause in the contract until the production company officially announced the project was going ahead.

Yesterday, Kingdom Come production manager Brigitte Yorke confirmed filming would take place "in Otago, as well as other regions of the North and South Islands".

"The film is still in its very early stages of pre-production. Filming is scheduled to commence in early 2009," she said.

Other details would be confirmed later.

The resource consent application shows more than 100 facades will be built to simulate the single- and double-storeyed buildings in the biblical site of Capernaum.

Dean Wright, who was involved with major productions such as the two Chronicles of Narnia films and Lord of the Rings, is listed as producer-director.

The reserve is usually occupied by hundreds of people during the Christmas holidays and, to cater for campers, set construction by the film company will cease on December 20 and recommence on January 5.

Campers will still be able to use the area not being used by the film crew.

The Falstone Camp Society had been consulted and indicated support for the project.

A meeting was also planned with campers to outline the project and address any concerns.

Rumours of a major film at Lake Benmore had been circulating in North Otago for about two months, but nothing could be confirmed until it was raised at Tuesday's Waitaki District Council meeting by Cr Struan Munro.

A search of resource consent applications filed with the Waitaki council turned up approval for a non-notified land use consent to South Vineyard Ltd for the Falstone camping reserve.

Construction of the set and facilities is expected to finish about the middle of February, with filming through to March 5.

The set would then be removed and the site restored by the end of March.