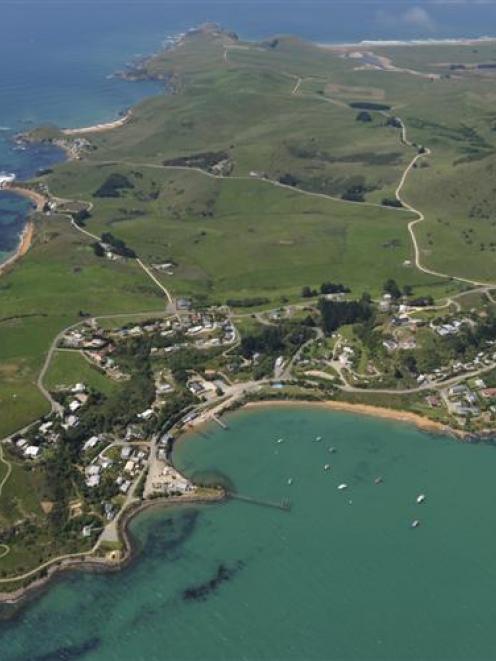 Moeraki was first settled by Maori, and became a whaling base in 1836. Photo by Gerard O'Brien.
The 175th anniversary of the establishment of the seaside settlement of Moeraki by whalers in 1836 will be celebrated on Boxing Day.

Moeraki was originally a Maori settlement and became a whaling port when European whalers arrived to set up a base on Boxing Day 1836. Maori were also subsequently involved in whaling.

While whaling at Moeraki had declined by the 1860s, the village had the best natural harbour between Otago Harbour and Akaroa, and with Oamaru badly needing a sheltered port, for a time it looked as if Moeraki would fill that role for North Otago.

A railway line was built from Oamaru to Moeraki by 1877, before the South Island main trunk was completed to Dunedin, but a pattern of landslips at Moeraki resulted in extensive repairs to the line and closure in 1879 of the section between Hillgrove and Moeraki.

The iron wharf at Moeraki received little use after the railway closed and the decking was eventually removed.

Fishing and tourism became the mainstays of Moeraki and today Fleur's Place restaurant, the Moeraki Tavern, the Moeraki holiday park and motels cater for large numbers of visitors throughout the year.

Walking tracks have been developed around Moeraki, including the Millennium track, built by the Otago Regional Council as a year 2000 project along part of the former railway formation.

It is possible, except at high tide, to walk from Moeraki to the Moeraki boulders along the beach.

Three earlier Moeraki anniversaries have been celebrated with a major projects to benefit the community.

In 1986, the lookout on the hill to the east of Moeraki was opened.

In 1961, the Moeraki church Kotahitanga, which means "one people", was shifted from the Kaik to the waterfront in Moeraki village and rebuilt.

It was later shifted to its present site further west in Haven St.

In 1937, Centennial park on the Moeraki waterfront was developed, but celebrations were delayed a year by an outbreak of polio in 1936 that restricted many public gatherings.

Monday's programme will begin with a church service led by the Rev David Crooke at the Kotahitanga church at 9am, an official opening by Waitaki Mayor Alex Familton and local leader David Higgins follows at 10am and will include a dedication of the 175th anniversary plaque.

A fun day on Boxing Day will follow including a sand castle competition and a treasure hunt at 10.30am and a fun run at 11.30am.

There will be a multicultural group performance, museum and photo displays, charter boat rides and helicopter rides.

Food and souvenir stalls and children's entertainment will be provided.

A dance will be held at the Coronation hall, Moeraki, at 7 pm.