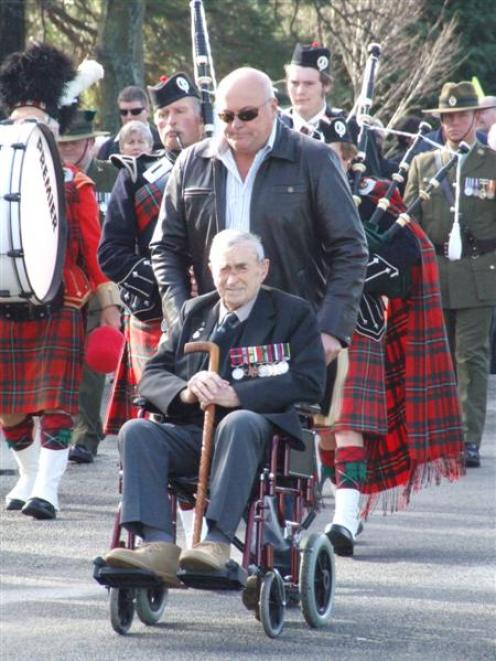 The 22-section residential development - the biggest in the town for decades - has been named Eric Batchelor Pl after New Zealand's most decorated surviving World War 2 veteran.

Wearing his medals, Mr Batchelor, who turns 88 this month, was at the head of a parade from Victoria Park to the subdivision, accompanied by the Waimate Highland Pipe Band, army representatives, his family, friends and Waimate residents.

Mr Batchelor, who served in North Africa and Italy, was awarded the Distinguished Conduct Medal and bar.

The Waimate District Council bought the 2.7ha block of land, at the southern end of Queen St, in the 1970s.

Several years ago, it decided to develop it to meet a growing demand for sections.

Mayor John Coles said it was very pleasing to see growth in the town.

The last census showed the population had stopped declining.

For some time, he had thought a new subdivision, with new houses side by side, would be "really something worthwhile".

Six sections had been sold and interest was being shown in others.

When the council asked for names for the subdivision, Eric Batchelor was by far the most popular choice.

The impressive stone entrance, made with stones from the Waimate Gorge, was a monument to "our hero", Mr Coles said.

An emotional Mr Batchelor said it was a great pleasure and honour to cut the ribbon and open the subdivision.

He then stood as the Waimate Highland Pipe Band played the Waimate Warrior, a song in his honour.