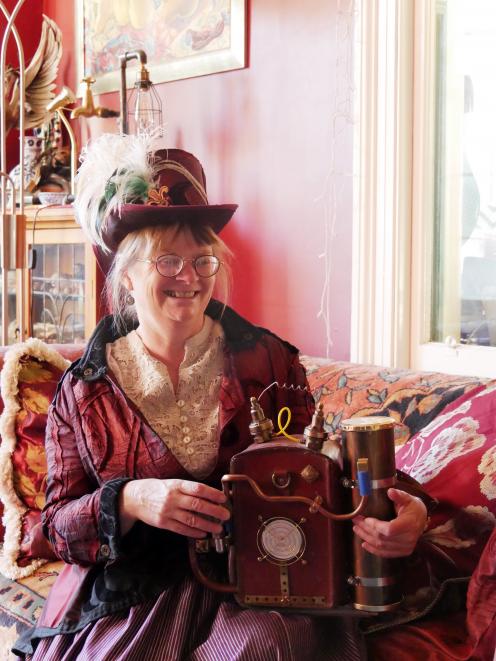 Artist Trish Shirley has been sewing up a storm to make her costume for this year’s Steampunk NZ Festival 2021 in Oamaru. PHOTO: RUBY HEYWARD
Forget water, creativity fuels this Steampunk engine.

It is full steam ahead for the Steampunk NZ Festival 2021 next month, and for Gary Shirley it is time to get into the workshop.

Between inventing fantastical gadgets and nifty costumes, steampunk was about imagining how the Victorian aesthetic would look with today’s technology, and a touch of science fiction, Mr Shirley said.

"It makes going out for a coffee an occasion," he said.

But above all, it was a chance to play with creativity, and his wife, Trish, was the prime example of this.

Mrs Shirley used her creative talents — and an "ample supply" of duvet covers — to concoct Victorian-esque costumes, which also happened to be very heavy.

She was in the middle of fashioning a summer bustle, using repurposed fabric from the opshop that set her back a mere $6.

"We all make our own stuff."

It just seemed wasteful not to, she said.

The couple got involved with steampunk after Mrs Shirley helped out at the Tomorrow As It Used To Be exhibition held at the Oamaru’s Forrester Gallery in 2009.

Now, she and her husband were two of the League of Imagineers’ 30 active members — across Dunedin, Oamaru and Wellington — who were preparing themselves for the festival’s "Adventures in Astronomy" theme this year.

While Covid-19 stopped the annual event in 2020, and the Fire & Steam after-dark street party to open proceedings, both were back this year.

The festival programme is full of dinners and dances, teapot racing and parasol duelling, fashion flaunting and fabulous photo opportunities. This year, the fashion show was open to anyone who fancied showing off their carefully crafted costumes.

"Just come along and enjoy yourself," Mr Shirley said.

"It’s inclusive, for everybody, young and old. It’s about connecting with people in a creative way."