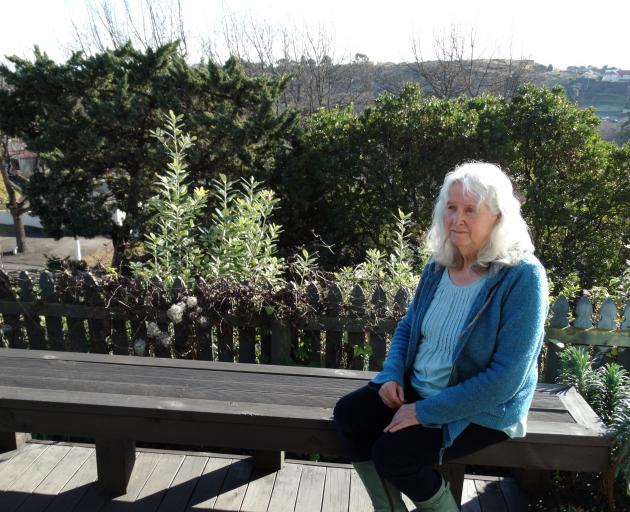 Douglas Tce resident Ann Mackay is upset several trees have been removed from the area around the Severn St wall in Oamaru, before planned rehabilitation work by Waitaki District Council contractors. PHOTO: DANIEL BIRCHFIELD
An Oamaru woman fears removing trees in Severn St to repair a section of an Oamaru stone wall that toppled after heavy rain will take a toll on birdlife.

Late last week, Waitaki District Council contractors completed tree removal work in Douglas Tce, in the block between Itchen and Greta Sts, part of a larger programme to replace part of the more than 80-year-old three-tier structure, a section of which failed after an extreme rain event in May 2016, sending stone blocks crashing on to the footpath and State Highway 1.

In June 2019, the council unanimously approved rehabilitation of the wall for $550,000, including a NZ Transport Agency subsidy.

However, Douglas Tce resident Ann Mackay was far from happy with at least one aspect of the work: the loss of a number of trees which provided for birdlife.

"I have seen lots of tui and bellbirds in the trees outside my house and there is another one further down, a Mediterranean strawberry tree, the birds eat those crazily. They drop them on the deck, half eaten."

She was also concerned removing the trees might affect air quality along the busy stretch of highway, create more vehicle noise, and potentially a further landslip.

"It’s the loss of birds that is the saddest thing for me ... to knock down the trees for a wall, I just feel like there should be another solution than knocking the trees down."

"There is no option. I like the trees ... we were very reluctant that we had to do that, but to build the hole to keep the wall strong and sustainable in the future, we had to do it.

He said "appropriate" trees and plants would be planted to keep with the "Severn St environment", and that the wall would be constructed in such a way that tree root networks would not help hold the soil.

Root barriers would instead be placed beneath it to control growth, he said.