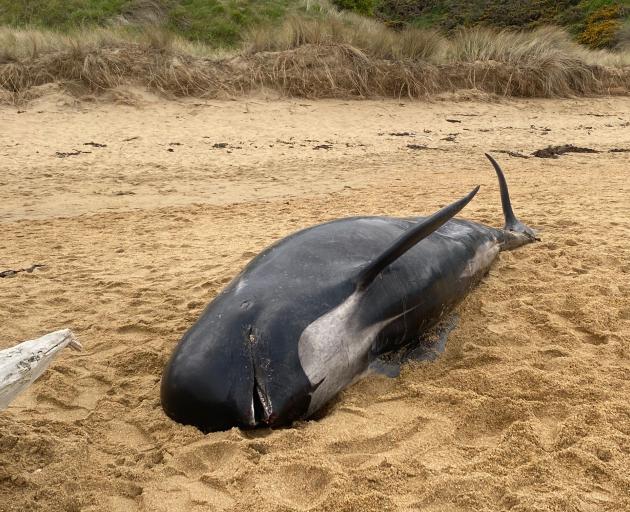 A dead female long-finned pilot whale, about 4.3m long, washed up at Kakanui's Campbells Bay on Saturday night. PHOTO: REBECCA RYAN
It is likely a whale that washed up on a North Otago beach at the weekend died of natural causes.

Overnight on Saturday, a female long-finned pilot whale, measuring about 4.3m long, washed up on the beach at Campbells Bay in Kakanui. The Department of Conservation was alerted at 7.20am on Sunday, and believed it was dead when it washed ashore.

Doc ecosystems science adviser Clement Lagrue said the cause of death had not been determined.

"However, inspection of the whale did not show any sign of trauma or injury," Mr Lagrue said.

"The whale was slightly underweight and the teeth were worn, indicating that the animal may have been of advanced age. Evidence indicates natural cause of death at sea with subsequent wash-up of the body."

Doc staff were at Campbells Bay on Sunday and yesterday, and had been working with Te Runanga o Moeraki on the processing of the body.

"We also contacted the local museum and the marine department at the University of Otago. The consensus was that the whale should be buried on site."

Working with local contractors, the whale was buried yesterday. The exact location would be recorded and provided to the runanga, Mr Lagrue said.

Measurements and superficial postmortem examination information would also be passed on to the runanga and recorded by Doc.

Doc had a standard procedure to follow when a whale was found washed up, Mr Lagrue said.

"Integral to whatever action we might take is working with whanau, hapu and iwi, ensuring respectful treatment of the taonga, animal welfare and the health and safety of human responders as well as the wildlife."

Finding a dead whale on a beach was always sad, Mr Lagrue said.

"I felt a deep sadness when I was standing by the whale with my son as these are amazing animals, very intelligent and long-lived."

But when just one whale washed up dead with no obvious sign of trauma, people should not be alarmed as it was "part of nature".

People were often drawn to whales when they washed ashore, and it was important to show respect for them, Mr Lagrue said. Doc did not recommend touching dead whales, and taking any parts of the animal was "both disrespectful and illegal".

"Admiring and inspecting a dead whale is normal behaviour and is perfectly fine as long as it is respectful of the integrity and mana of the whale."