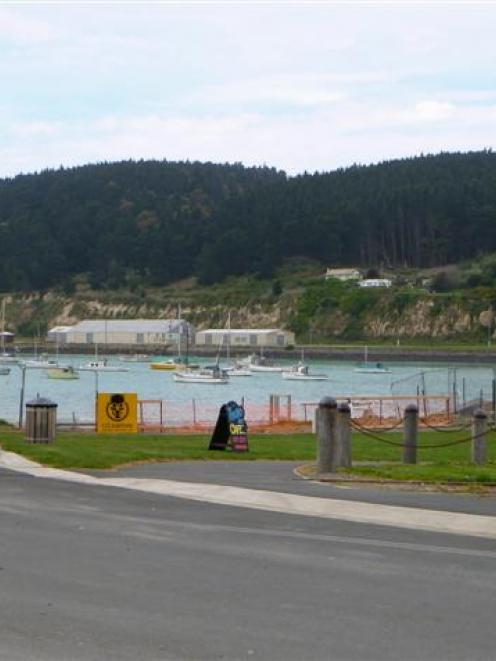 Cape Wanbrow (background), at Oamaru Harbour, may change dramatically if the Waitaki District Council decides to clear-fell the forest. Photo by David Bruce.
One of Oamaru's most prominent backdrops - Cape Wanbrow - could undergo a major visual change, under a proposal to be considered to fell its pine forest because it is so dangerous.

The Waitaki District Council will consider that as one option at its meeting on Tuesday, October 1, because more wind damage in the September 10 storm has left trees and debris hanging precariously in the tree tops.

Cape Wanbrow, which is very popular for walking, jogging, mountain biking and exercising dogs, has been closed to the public since wind damage in June made it too dangerous for use.

The most recent gales severely hit the plantation again, contractors working to clear earlier damage having to flee from flying debris.

A report from corporate services group manager Carolyn Carter says the forest is now more dangerous, with material on the ground and hanging in the trees, trees leaning against other trees and roots destabilised.

Debris or trees could fall on anyone ignoring the ''Keep out'' signs. Even yesterday, a group of people was in there, exercising dogs.

While contractors were working in the closed area, people were walking in the area, despite warnings.

If someone was injured, that could pose a legal risk for the council, even if the signs had been ignored.

The report recommends the forest be clear-felled, about two years earlier than expected.

Other options, but not recommended, included:Selectively clearing loose material and retaining trees for the recreational value - but this would be difficult, costly and not viable long term.

Doing nothing but keeping the area closed, with compliance strictly enforced.

Leaving trees or doing nothing would result in further damage in high winds because trees which had grown to withstand such winds had been blown over, leaving the area exposed.

A consultant's report said the forest had been ''very shaken up'' by the latest gales.

''[The] primary concern for the council is the very elevated risk of injury to the public in this important and well-used amenity,'' the report said.

Coupled with this was the apparent increasing instability of the forest, with more damage in the latest gales, particularly in the eastern and western areas.

The next high winds would see more forest lost, reducing the value of the trees.

However, one positive aspect was the present high prices for logs, which would help offset the higher costs of felling because of wind damage.

If the forest was clear-felled, the next issue for the council would be replanting, with any plan and costs included in next year's annual plan for public consultation.

What would be planted, along with any increased ongoing maintenance costs, would also need to be considered.