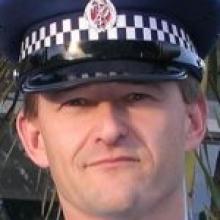 Aaron Nicholson
Police are investigating a violent home invasion incident in Wanaka when a man was attacked with a wheelbrace and demands were made for drugs and money.

Sergeant Aaron Nicholson confirmed yesterday a complaint had been received from three occupants of a Stratford Tce house that three men armed with weapons and wearing bandannas over their faces had entered their home late on Tuesday and demanded drugs and money.

Police are now seeking help in identifying the suspects.

One has been described as a male Maori or Polynesian, about 1.8m tall, aged in his mid-20s, of solid build, and wearing a hoodie and dark clothes.

The second has also been described as a male Maori or Polynesian, about 1.5m tall, in his early 20s, wearing a hoodie and dark clothes.

The third has been described as a male Caucasian, 1.7m tall, aged between 18 and 20, of thin build and wearing dark clothing.

The victims were two men and a woman aged in their early 20s. Three visitors were also at the house.

Sgt Nicholson said one of the men armed with a wheelbrace hit one of the occupants over the head.

"The other occupants were actively intimidated by the other two offenders, one of which held a large piece of wood, while demands were made for money and drugs," Sgt Nicholson said.

"The offenders left with a small amount of cash and miscellaneous property. The injured man required medical attention, receiving stitches for a head wound. No-one else was injured during the incident. The three offenders were seen to leave on foot towards Russell St."

Sgt Nicholson said he wanted to hear from anyone in the Stratford Tce or Russell St area on Tuesday night who saw three men walking to or from the property.

He also wanted to hear about any suspicious activity earlier on Tuesday.

Sgt Nicholson told the Otago Daily Times the situation was "a rare thing for Wanaka".

"[I] would like to reassure local residences [sic] that these types of incidents are not random and this address was specifically targeted by the offenders," he said.

Otago Daily Times records show privacy invasion crimes in Wanaka are infrequent. The most common complaints are of vacant holiday homes being burgled.