On the beat: Broken window mystery 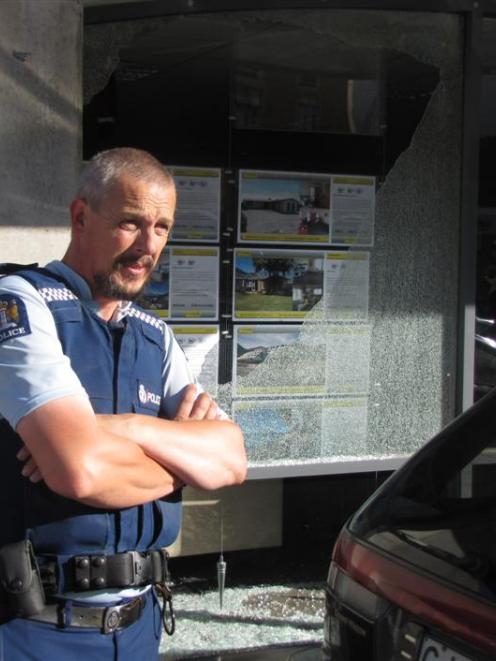 Constable Terry Erseg was called to the scene by a concerned motorist. He said no-one had been seen breaking the window.

Constable Tracy Haggart, of Queenstown, said the window might have been broken by movement in the building foundations.

• Charged with drink-driving
Const Haggart said a Queenstown man (25) was caught driving over the legal breath-alcohol limit on Lake Esplanade by Queenstown Police at 11.16pm on Friday.

The man had a reading of 555mcg. He was charged with driving with excess breath-alcohol and is due to appear in the Queenstown District Court today.

• Santa Claus arrested
A group of seven Invercargill men dressed as Santa Claus was pulled over by police at Lake Esplanade on Friday at 11.20pm One of the men (22) was arrested for disorderly behaviour and breach of a liquor ban. He is due to appear in the Queenstown District Court today.

• Bag taken
Police are seeking further information on a burglary which happened about 11.30pm on Friday. A man reported hearing a noise in the bedroom while he was in the bathroom. His bag was taken, but several items were located. He was still missing an iPod and a cellphone, Const Haggart said.

• Disorderly behaviour charge
A heavily intoxicated Dunedin man (23) was arrested at 3.37am on Saturday and charged with disorderly behaviour. Const Haggart said the man was seen throwing stones at parked cars, at the bottom of Queenstown Mall.

• Theft of dress
Police are seeking information on the theft of an $875 dress from a shop on the Mall. The theft occurred between 10am and 12.30pm yesterday.

• All aboard
Three Invercargill men in their early 20s were arrested for trying to get a closer look at the Kingston Flyer about 7.10pm on Saturday night. The men climbed a fence and climbed aboard the historic steam train. The men were charged with being unlawfully in a private property.

• Motorcycle taken
A yellow Honda motorcycle was freewheeled from a Hallenstein St property some time between 1am and 7am yesterday. The bike was taken down Beetham St, across Stanley St and pushed down a bank on Coronation St. Police would like to hear information from anyone with further information.

• Handbag stolen
A handbag containing a passport and a wallet was stolen from a Cow Lane bar about 3am on Sunday.