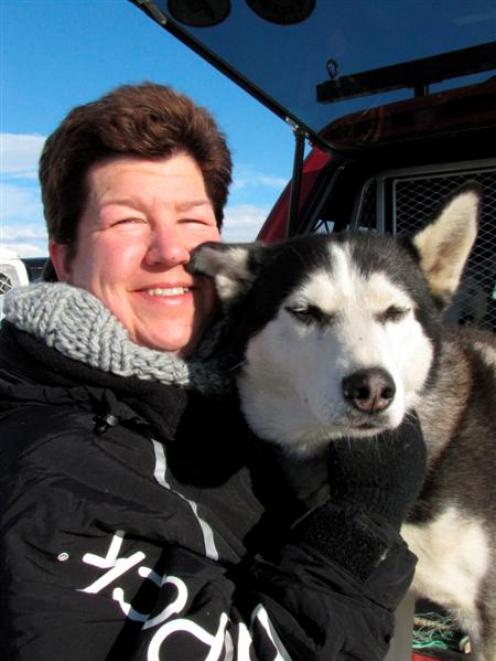 Karen Ramstead, of Canada, inspects Siberian husky Aladdin (8), of Clyde, before the start of the New Zealand Sled Dog Championships at the Snow Farm last night. Photo by Marjorie Cook.
Canadian long-distance sled dog musher Karen Ramstead never imagined she would throw away her job as manager of a bone china shop and go to the dogs.

Born and raised in Toronto, she took a bribe of a pure-bred Siberian husky from her husband Mark when he wanted to move to Northern Alberta to further his career 20 years ago.

Now she has a kennel of 60 dogs at her hometown of Perryvale, one hour's travel north of Edmonton, while Mr Ramstead works as an industrial engineer at a pulp mill.

Now a veteran of nine Iditarod races and a guest and race marshall for this week's New Zealand Sled Dog Championships at the Snow Farm, Mrs Ramstead laughs at the transformation dogs have brought to her previously pet-less world.

She was the first woman to complete the gruelling 1760km Iditarod race and now spends three months in Alaska every year as well as racing throughout the United States and Canada.

"This is really outside the path I expected to lead in my life," she said at the Snow Farm near Wanaka yesterday.

Unlike many mushers, Mrs Ramstead prefers pure-bred Siberian huskies, which she says have fallen out of favour in recent years with the rise of the faster, purpose-bred Alaskan husky.

She compares her dogs to ice hockey teams. There are the experienced racers in mainstream competitions, the yearlings in training and a group of older, retired dogs.

About 35-40 dogs actively compete for spots on her mainstream team. About 16 would be required for the Iditarod race.

Mrs Ramstead competes in the shorter 200km-300km races, has been a race marshall for the 1600km Yukon Quest and began racing the Iditarod in 2000.

If a dog does not want to train or race, she will not insist on it but will not use it for breeding.

She is aware animal rights activists argue sled dogs have no choice but to race, but argues some dogs choose the racing lifestyle and get up every day full of enthusiasm for training and racing.

She has also found herself relying on her team's instincts and decision making, particularly in storms when she has lost the trail.

"To watch the dogs say 'I know where the trail is - it's over here' is really rewarding. And I feel they get a great sense of accomplishment too," she said.

In a 1600km race, which can take between eight and 12 days, food caches are lain along the way and all the dogs undergo heart and blood tests before they set out.