Chilling in snow cave for a month 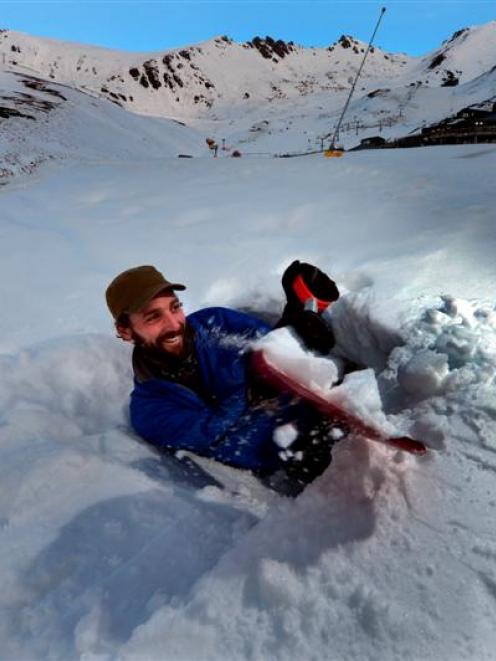 Blair Whitaker (33), of Queenstown, scouts for locations for his home for a month, a snow cave. Photo by Stephen Jaquiery.
A Queenstown man is setting up today for a month of living in a snow cave on the Remarkables mountains.

Blair Whitaker plans to skydive on to the mountain this morning and then begin digging his cave in a 2m deep snow drift next to the Remarkables Skifield car park.

The cave will have a place for cooking, a shelf for his gear, a shelf to sleep on and another room for a portable toilet - but no shower.

Mr Whitaker told the Otago Daily Times he was offering the public various opportunities through an online auction site, including a night in the cave complete with dinner, breakfast, hot chocolate and a shot of whisky.

Mr Whitaker is a professional pilot who is packing parachutes for a sky-diving operation, and is working towards becoming a sky-dive cameraman.

He is originally from the Waikato and says tonight will be his first in a snow cave.

"I've built lots of snow caves over my life, mucked around in them, had lunch in them during the day, but I've never actually done overnight missions.

"So I'm going in the deep end a little bit I guess."

He would use candles for light and expected they would also help keep the temperature up.

Mr Whitaker said he had been skiing since he was 5, climbed Mt Ruapehu with his father when he was 10 and had spent a lot of time in the mountains.

He had been thinking about living in a snow cave for 13 years and had spent the past seven months preparing for what he calls "the snow cave project".

Much of his equipment and clothing has been donated by sponsors and is being auctioned to raise money for Aspiring Avalanche Dogs.

He would begin his cave-building project with a little "sink hole" where he could cook outside "and from there I dig in and up", Mr Whitaker said.

Other rooms could be added as snow conditions allowed.

He would snowboard on the mountain during the day and talk to people about what he was doing.

"And then when everyone's leaving the mountain I will head back to my little cave and cook up my freeze-dried meal and wait for the next day, I guess."

After a month in his snow cave, Mr Whitaker expected his first priority might be a shave and a shower.

Founder of Aspiring Avalanche Dogs, Matt Gunn, of Wanaka, said money raised by Mr Whitaker would go towards a snowmobile to help speed up avalanche rescues.