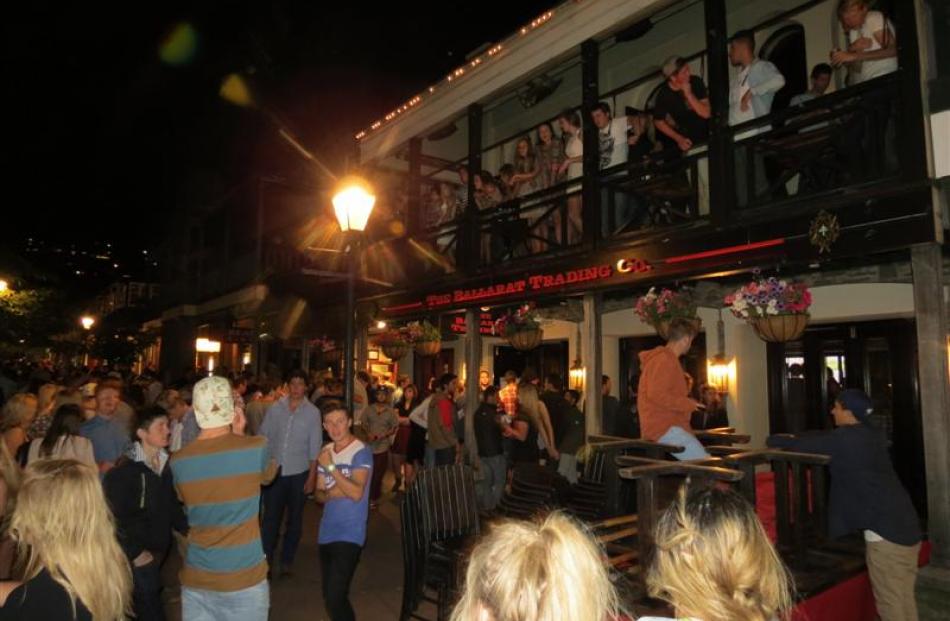 It is a fine line creating a festive, fun atmosphere in a tourist town such as Queenstown, but also one that is safe and encourages personal responsibility. In the third part of our series Booze Control: Stop and Think, Queenstown reporter Tracey Roxburgh talks to a Queenstown Lakes District Council staff member about how they try to find this balance.

The Queenstown Lakes District Council has its work cut out.

It has the unenviable task of finding the right balance between encouraging visitors and allowing them to enjoy every moment of their Queenstown experience, making the resort attractive for permanent residents of all ages - and regulating the seemingly overwhelming number of licensed premises in the district.

It is the latter which QLDC regulatory manager Lee Webster is focused on.

Late last year, the council conducted an informal online alcohol survey - a process Mr Webster described as a ''litmus test'', designed to glean information from residents and visitors about alcohol and Queenstown.

It was the first part in a process which will ultimately determine whether the district will have a local alcohol policy under new regulations.

However, of key importance was taking time to get it right, Mr Webster said.

''We need to understand what our community's needs are.''

Mr Webster said there was no doubt there were issues in the Queenstown community with regard to alcohol.

For there to be a workable solution, agencies had to work together, he said.

Those agencies included police, the medical officer of health, door staff and taxi companies, along with ''the key ones, licensees''.

Mellow Yellow, launched in 2011, in which door staff and community guides in high-vis yellow vests give the impression of a heavy security presence, had proved effective.

In Wanaka, a trial was under way whereby any patron ejected from one bar could not gain entry anywhere else.

However, there was ''no point'' in those sorts of initiatives unless licensees ''buy into it''.

''Otherwise, we have to regulate.''

The new legislation, which came into effect on December 18, made it easier for the District Licensing Committee (DLC), chaired by retired district court judge Bill Unwin, of Nelson, to refuse licences based on previous incidents which adversely affected the ''amenity and good character'' of an area.

That included excessive noise complaints, or patrons vomiting or urinating in doorways.

It also gave power to neighbours who could make complaints which would be dealt with by the DLC.

Mr Webster said licensees had an extremely difficult job - enticing people into their venue, encouraging them to have a good time and enjoy themselves and simultaneously expecting them to ''behave''.

The major issue was what happened when people did not behave and were ejected or denied entry.

''Alcohol is a drug that affects your mind. The decisions you are making now are not the same as you would after two bottles of wine.

''They [intoxicated people] are not cognisant and they're not thinking, which is why they make stupid decisions.

''You might go to the supermarket, buy a couple of bottles of wine, drink them, go out and be refused entry to a bar.

''Now you're on the street.

''It's not a licensee issue.

''Has the council got the ability to remove you? No.

''Can the licensee move you along? No.

''How can we deal with this?''The new legislation did reverse parts of the 1989 Sale of Liquor Act and, in some respects, removed responsibility from individuals for their behaviour, and gave the DLC more teeth.

It also enabled territorial authorities to set their own fees, meaning the costs would be born entirely by the licensees. Previously, the council had offset the cost by 51%, through rates.

Further, it enabled the council to use its discretion to vary fees, depending on the efforts made by licensees.

However, the issue of alcohol-related harm - particularly when that harm occurred outside licensed premises - would not be easily fixed, Mr Webster said.

''We want people to be safe - come here, enjoy themselves, and go home in one piece.

''When we talk about alcohol-related issues or alcohol-related harm, it's [often] the overseas person who just punched the next person because they can't get to their burger on time.

''There are issues around youth access to alcohol - parents giving their children alcohol and they're not being guided in responsible drinking.

''We have issues with domestic violence, acute and chronic disease - it's not just the person in the street.

''We are trying to create a safe environment for our whole community.''