Enthusiast's flight of a lifetime 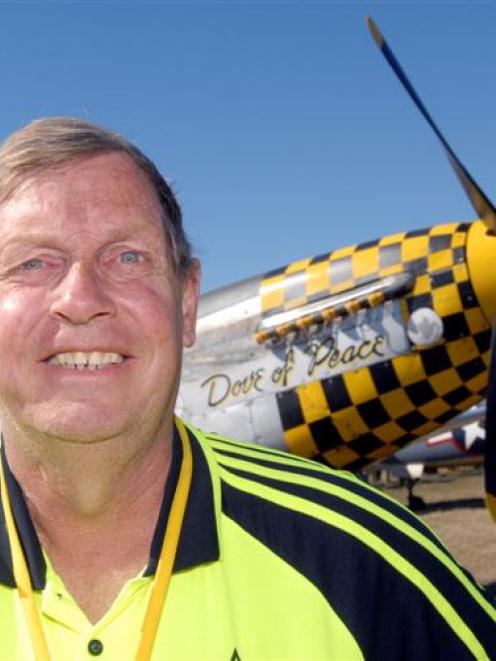 Mr Fox works as a display setter for Allied Press and moonlighted as a security officer for Allied Security to save for the flight fee.

He made no new sacrifices to save up.

"I don't smoke and I seldom drink," he said.

He has attended every Wanaka airshow since they began in 1988 and does not get bored.

"... there is always something different. There are different aircraft each time. Some are the same but some are available and others aren't available," he said.

Mr Fox has also been working at this year's air show as part of the security team, so he was not seeing as much action as he normally would.

He took his 25-minute flight with Wanaka pilot Robert Borrius-Broek about dusk on Friday evening, after the air show practice was finished.

When he got into the 1945-era aircraft, he was surprised to find that there was a lot of room and he felt quite comfortable, although he was tightly strapped in and found the temperature quite warm.

The conditions were perfect and he was thrilled by the views of Lake Wanaka and of Aoraki Mt Cook from 8000 feet-10,000 feet.

He ate nothing in the two and a-half hours before the flight as an insurance policy against feeling ill during the barrel rolls.

However, everything proceeded smoothly as the pilot gradually increased the g-forces to the plane's maximum of 4G.

"I could really feel it, sinking down and the blood draining out. It was a funny sensation ... It took nearly an hour for my legs to come right," Mr Fox said.

The flight ended with a buzz over the houses of airshow founder Sir Tim Wallis, airshow trustee Garth Hogan and the Wanaka backpackers, where Mr Fox was staying.