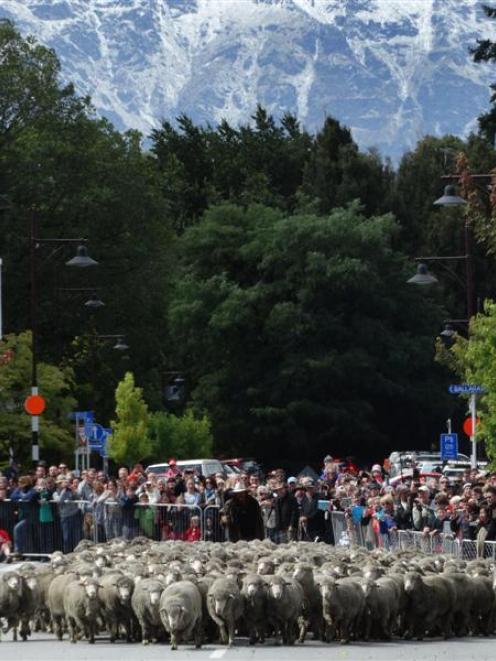 It had less of the stampeding and goring of Pamplona's Running of the Bulls, and more of the barking, eye-balling and milling around of television's A Dog's Show.

The event launched the inaugural Hilux New Zealand Rural Games, a festival of rural-themed sport, entertainment, food and wine based at the Queenstown Recreation Ground this weekend.

Thousands lined the route from the Village Green to Earnslaw Park, bringing the resort to a virtual standstill as 350 merino rams and ewes were coaxed and cajoled along the course by a squad of shepherds and sheepdogs.

The rams were not having a baa of it, employing every stalling tactic in the book.

One alpha ram took delight in goading his canine adversaries, and at one stage led a short-lived breakout attempt.

The ewes were more compliant, wandering along the course with an air of confusion, rather than belligerence.

Games founder and trustee Steve Hollander said he was amazed at the turnout, which he estimated at more than 10,000 people.

He described the sheep's attitude to the event as ''very casual''.

''They were enjoying their time in town. They don't get to do it very often.

''The fact they were going so slowly meant everyone had a good chance to have a look at them.''

The event had worked perfectly as a promotion for the weekend's events.

''Now everyone in town is aware of the New Zealand Rural Games.''