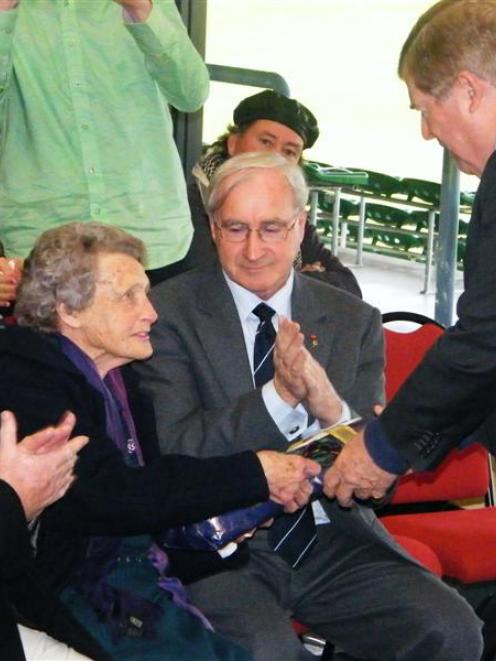 John McBride's grand-niece May Hanning, nee McBride, exchanges gifts with US Ambassador to New Zealand William McCormick during the reception on Saturday. Photo by James Beech
The grand-niece of honoured Corporal John McBride says the unmarked grave in Frankton Cemetery was not known to be the final resting place of the American Civil War veteran and Queenstown pioneer until recent research confirmed it.

Cpl McBride was remembered by about 70 descendants, relatives and guests at a graveside service on Saturday morning.

United States Ambassador to New Zealand William McCormick was among the representatives and the blessing was led by military chaplain Rev Anthony Harrison.

Choristers who were coincidently on tour from the University of Notre Dame, in Indiana, volunteered to sing at the service, strengthening Irish immigrant McBride's ties with America.

May Hanning, nee McBride, was born in 1917 and was the oldest member of the service for the dedication of Cpl McBride's memorial plaque beside his grave.

His plot had been surrounded by a wrought-iron railing and next to later generations of the family, but was otherwise unmarked.

"We didn't know who that grave belonged to because there was no headstone and the family didn't talk about it when we were young," Mrs Hanning said.

It was only when one of her sons, Tony Hanning, director of Catholic Education for Otago-Southland, started researching the McBride legacy 21 years ago that the mists of the past started to clear.

Details of Cpl McBride's three years with the Union army during the American Civil War, before he followed his six brothers to the Wakatipu gold rushes, had come "out of the blue", Mrs Hanning said.

Today means a lot to me because now I know where the link is."

Saturday's was the first grand reunion of the McBrides she could remember, she said.

There was a double reason to celebrate because she would mark her 91st birthday today.

Mrs Hanning was born and raised in Queenstown, educated in Dunedin then moved to Invercargill in 1951, where she still lives.

She was the youngest of three sisters and one brother, and remembered working as a waitress during her teenaged years in Mulholland's Tearooms, which were on Ballarat St.

She keeps in touch with cousins in Ireland and England.

She said the McBride family tree had become more like a forest, a "League of Nations" with relatives marrying Maori, Australian, English, Samoan and Singaporean spouses.