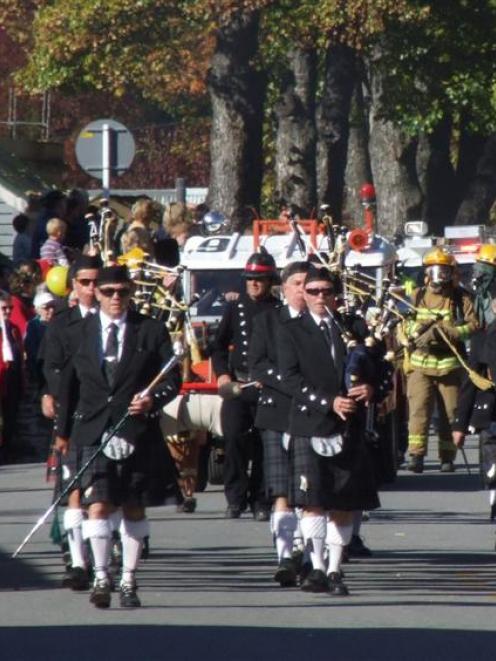 A conservative estimate put total attendance about 15,000 people, including a crowd of 8000 to 9000 that turned out for the main street parade and market day on Saturday, April 26, festival director Julie Hughes told the Queenstown Times yesterday.

Another 2500 attended the festival's ticketed events, including nearly 200 at Saturday night's Rilean Autumn Ball, and thousands more showed up for the festival's many free street performances, workshops and children's activities, she said.

"We have had huge crowds and amazing events."

Mrs Hughes, who has been involved in the annual event for five years and co-ordinator for the past four, said the festival had grown out of sight in recent years.

Crowds for the main parade had more than doubled in that time, and the number of free and ticketed events continued to grow.

The event's budget and the work involved had also more than doubled, with growing crowds coming with additional regulatory demands - such as traffic management plans - to ensure the festival was run safely and smoothly, she said.

She put the event's success down to its close links to the community.

"We have events the community want to take part in, that work for the bracket that we target, which is probably families and locals.

"It's not a tourist festival, it's a local festival.

The event, in its 24th year, had passed from one generation to the next, with those who were children at the first few events now attending as adults and bringing their own children along, she said.

"It's such a community festival and it's become intertwined in people's lives," she said.

"I think that's a wonderful part of the festival."

Community support for the event took many forms, beginning with the estimated 1200 people involved - directly or indirectly - in organising shows, stalls and exhibitions, she said.

Their contributions ranged, from organising an individual group's market stall, to volunteers acting as parade security or traffic marshalls, and others - such as the Arrowtown Volunteer Fire Brigade - prepared to help with heavy lifting, she said.

Seven different community funding agencies and eight corporate sponsors had also stepped in to assist with grants and sponsorship, she said.

The festival's five-member organising committee were, except for Mrs Hughes (the only paid festival staffer) all volunteers as well, and donated their time while working day jobs, Mrs Hughes said.