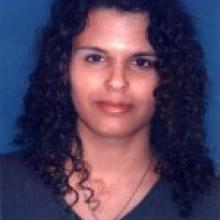 Liat Okin
Those searching for missing Israeli tramper Liat Okin have found footprints leading off the Routeburn Track and into a "dangerous" back country area.


The find, on Tuesday, revealed for the first time yesterday, was the first possible sign of Ms Okin (35) since she vanished while walking the track alone on March 26.

Her brother, Itamar Tas (26), yesterday said the trail of footprints stretched about 40m, leading away from the track and down a difficult slope towards the Hollyford Valley, midway between the Mackenzie and Routeburn Falls huts.

The prints appeared to match Ms Okin's small shoe size and the sneakers she was believed to be wearing at the time of her disappearance, although the exact shoe type was not known, he said.

"They were found in a place where there shouldn't be any footprints. If you didn't make a big mistake you wouldn't get there," Mr Tas said.

"Nobody actually walks there, usually."

The tracks were found late on Tuesday by a member of the volunteer search party that has been scouring rough terrain around the Routeburn Track since an official police-led search was called off on April 22.

Worsening light late on Tuesday meant searchers were forced to quit the area without completing a full search of it, and bad weather since then has meant a postponement of the operation, Mr Tas said.

It was hoped searchers would be able to return to the area over the weekend and examine the prints and surrounding area in more detail, he said.

The gap between the prints would be measured to work out the height of the person who left them, and see if that matched Ms Okin's height of 160cm (5ft 5in), he said.

The area the prints were found in appeared deceptively easy terrain from the track, and it was not until well off the track the degree of difficulty became apparent, Mr Tas said.

"The problem is if you go down it's like a trap. It seems to be easy to go down but there are places where it's very dangerous," he said.

Mr Tas, who has relayed news of the find to his parents in Israel, said every day spent waiting for the weather to clear was "very disappointing".

He has not ruled out joining the search at the weekend, weather permitting, although given the difficult terrain.

"I'm not that useful over there," he said.

"It's not easy. I want to see everything. We must know the answer to this mystery," he said.

"It's very difficult for us to know no-one is actually searching."

Ms Okin has now been missing for 42 days, but Mr Tas said he still hoped for "a miracle".

"To be there a month and a-half, it's very difficult to survive. In a way we hope she's not over there . . . and she's alive.

"But of course we want to know the truth."

Senior Sergeant John Fookes, of Queenstown, said there were no plans to resume the police-led search as a result of Tuesday's discovery.

A cellphone stolen from Mr Tas last weekend, during a burglary of the Queenstown holiday home he has been given the use of, has still not been returned, he said.

The phone, containing 400 contact names and numbers, was his link to friends and supporters in Israel.