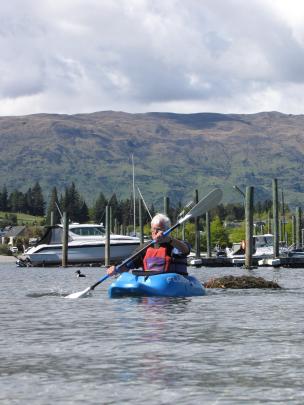 Lake Wanaka Guardian John Darby uses his kayak to shift a great crested grebe nest to shore so he can modify the floating platform it is built on. Photos by Mark Price 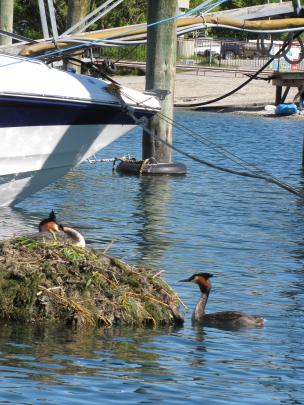 A grebe (left) floats high and dry on an artificial platform built by Mr Darby.

They do not walk much, they do not fly much and they certainly do not pay mooring fees.But Wanaka's small population of great crested grebes is beginning to gain a foothold on the town's marina, thanks to some help from a group of human fans.

The little diving birds with the magnificent head-dress and the elaborate courting behaviour are well known for inhabiting Lakes Hayes and Dunstan.

But their breeding success on Lake Wanaka has been affected by the lake's fluctuating level - leaving their nests either inundated or high and dry.

To help them overcome the problem, Lake Wanaka Guardian John Darby has been creating floating platforms on which the birds can build their nests in their favourite location around the marina.

He has four nests on artificial nesting platforms, catering for a total of three chicks and 15 eggs.

At least, that was the case until last Friday, when Mr Darby discovered damaged eggs in one nest, leaving him pondering whether the cause was a predator or a design fault in his platform.

Mr Darby said the grebe population increase was due to many local people, including Mitre 10 and gigatown campaigner Peter Marshall, helping out with materials for the platforms he has built and tethered (with permission) to the marina.

the next morning it had been claimed by a pair of grebes.

Mr Darby, who kayaks around the grebe nesting sites most days, considered it had been a ''pretty successful enterprise''.

''A lot of people are now watching them and taking a great deal of interest in them.''

Mr Darby said grebes were among the rarest birds in New Zealand, with a total population of about 600. They are extinct in the North Island.

One of the design challenges for nesting platforms has been the way grebes come out of the water - they jump rather than walk. That has led Mr Darby to spend a lot of time working out how to create platforms that ride in the water at a suitable height.

''As they build them up, they get heavier and heavier and the nest platform starts to sink.''

He described a grebe nest as ''one great big steaming compost heap''.

''The more it sinks the more they put on it to keep it above the water level.''

Mr Darby has a permit from the Department of Conservation to trial his nest platforms. It is hoped they will lead to an increase in the number of breeding pairs on the lake.