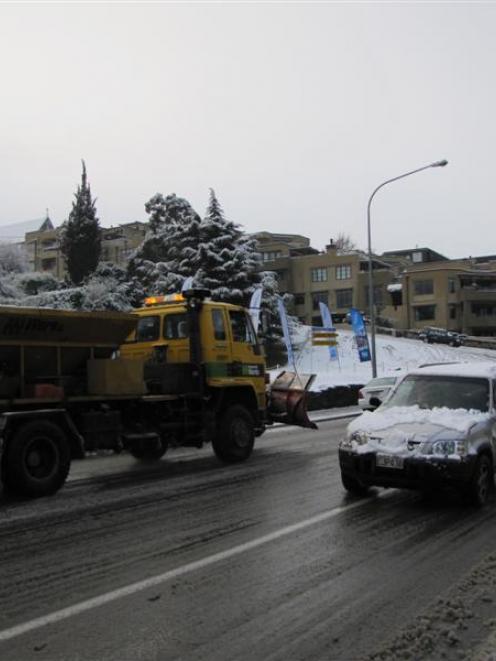 Of all the issues that faced the Queenstown Lakes District Council, winter road gritting was the one that really got people's attention. Photo by James Beech.
Winter gritting was one of the hot topics for submitters during this year's Queenstown Lakes District Council draft annual plan hearings, with 280 submissions received on the subject. In this week's Wakatipu Echo, mayor Vanessa van Uden explains where the council will go from here with that issue.

At the end of the month the council will adopt the annual plan.

Having called for submissions and held hearings, the council is now in the unenviable position of weighing up what stays and what goes - and it's tough. All this needs to be done in a challenging environment and not all decisions will be popular with submitters.

Of all the issues we took to the community, winter road gritting was the one that really got people's attention.

The council thought, rather than make a decision to include budget for winter gritting (affecting the rates by 0.25%) because the New Zealand Transport Agency (NZTA) had cut funding, we would let the community tell us what it thought. To grit or not to grit, that was the question.

So in the annual plan summary, in press releases, in advertising, in commentary, on the radio, on the website, and, yes, we even tweeted, we made it really clear.

We asked the question: Should the gap in NZTA funding be made up through rates?

We highlighted that such a move would affect winter ski activities and worse, be detrimental to road safety.

And we asked you for your view.

Thanks to the 280 people who made a submission about winter gritting.

An outstanding result, although I suspect there were hundreds more that held a view but did not quite manage to put pen to paper and still more who possibly picked up half the story.

Fortunately, as one resident eloquently stated, the council is not "a bunch of lunatics".

There was method to our madness!Seventy-three percent of submissions on the issue wanted gritting to continue at the current level. Decisions of the council can never be viewed as a poll, but this level of support, coupled with the level of concern expressed around safety, does give the council a mandate.

More importantly, it gives the council a number of very carefully worded and compelling arguments from members of our community as to why gritting should continue at its current level.

These will be sent to NZTA to reinforce the council's case that funding should not be withdrawn. And the council will continue to lobby NZTA.

The good news is, it appears the council is able to apply other funding from NZTA to ensure that this year, anyway, gritting will happen.

The job now is to ensure gritting continues to be funded in future years.

Thanks to everyone for having their say.

From the outset of this process I acknowledged council business was not necessarily going to be to everyone's taste, but you would have to agree if the decision was to reduce levels of gritting, it might have been on the radar of more than the 280 people who had their say come the first frost.

Next year we will be consulting on the 10-year plan and there will, once again, be key issues for which we will also need to seek community input.

Possibly gritting will be back on the table.

I can assure you it will be worth your while taking an interest.