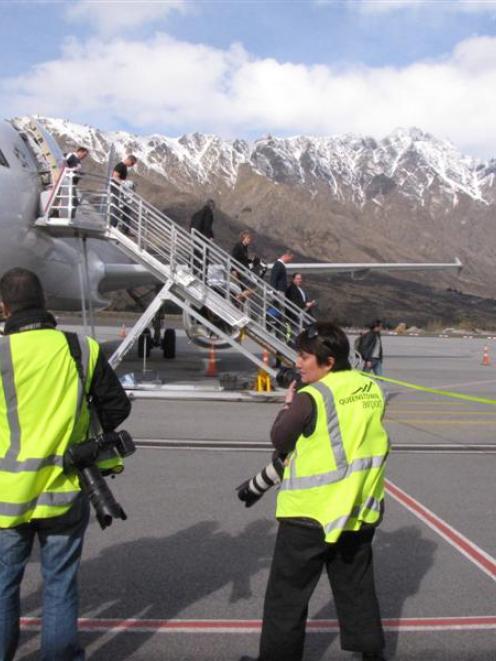 Media wait at Queenstown Airport for the Ireland Rugby World Cup squad to disembark from their flight. The RWC has provided Queenstown with massive media coverage. Photo by Tracey Roxburgh.
Queenstown Chamber of Commerce CEO Ann Lockhart considers the Rugby World Cup 2011 has provided an incredible opportunity for the community and the country to join together with a single focus. But, she says, once the tournament is over there are more serious topics on the horizon.

The Rugby World Cup has been a great opportunity for Queenstown to show itself off to visiting teams, supporters and media. The resort has hosted England, Romania, Georgia and Ireland and the enthusiasm of the teams to get involved with the local community has been fantastic.

By all accounts, journalists following the teams have provided texcellent media coverage overseas, which will result in some good spin-offs for the region.

It was also a bonus to have the Classic All Blacks playing the Classic French team in Queenstown and the calibre of the players attracted thousands of people to the sidelines, putting the national spotlight on Queenstown for this match.

But once the Rugby World Cup final has been played in late October it will be time to turn to more momentous issues - such as who will our next government be?

The election is scheduled for Saturday, November 26, and to give local people an opportunity to be properly informed before going to the polls, the chamber plans to hold The Great Debate 2011 in Queenstown on November 3.

The forum has been prompted by the same highly successful debate held in the resort before the last election in 2008.

Undoubtedly, the focus of the senior politicians will be on the economy and the ongoing repercussions for New Zealand, and its access to credit, of the major economic issues being faced in both Europe and the United States.

At home, the daunting cost of rebuilding Christchurch following the earthquakes will be a significant issue for prospective governments.

Closer to home is the ongoing and often frustrating question of local government funding for resort towns, such as Queenstown and Wanaka, to meet the infrastructure, amenities and other resources needed for the thousands of visitors who swell the numbers daily.

The Queenstown Chamber of Commerce Great Debate 2011 is one of the few planned in the country, in the build-up to the elections, which will have such a quality array of politicians in one place at one time.

The format will be primarily a question-and-answer forum from the floor and we are encouraging local residents and representatives of the business community to get involved and participate. It is a rare opportunity to ask some of our senior politicians the hard questions and get answers to our concerns as the country heads into a new three-year term of government.

National media will be present and the debate will also be recorded live, as it was in 2008.

• The Great Debate will take place at 7pm on November 3 at the Memorial Hall. Tickets are available from the chamber of commerce and cost $15.