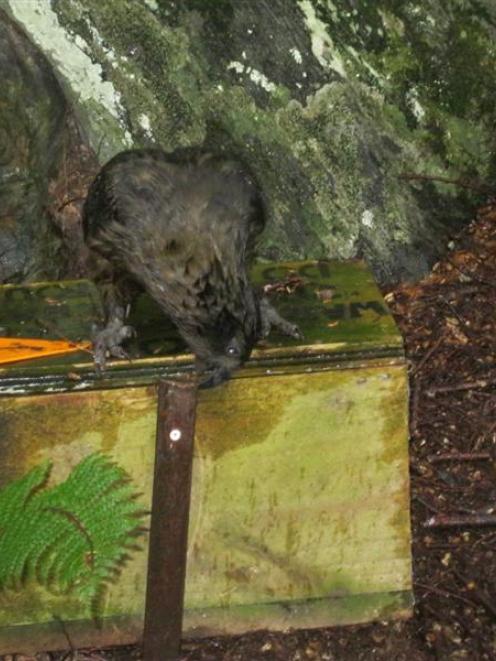 Mischievous . . . A juvenile kea attempts to break into a West Matukituki Valley predator control trap to take the eggs set up as bait inside. Photo Department of Conservation
Department of Conservation staff are being outsmarted by "gangs" of mischievous juvenile keas intent on breaking into predator control traps in the West Matukituki Valley, despite heightened security systems aimed at keeping them out.

Concerns were raised last summer about gangs of young keas interfering with the West Matukituki Valley predator control traps. More than 75% of traps had been sprung.

Traps near the Aspiring Hut were sprung by the boxes being rocked and rotated and in some cases, rolled away. The problem was first thought to be caused by human interference, but hut wardens then observed keas interfering with the traps.

The trap boxes were subsequently secured to the ground, which initially alleviated the problem.

However, footage was recorded last week by Doc staff showing determined keas working hard to crack the new security measures to steal the eggs inside, set up as predator bait.

Keas were pushing off the stones used to weigh down the traps and attempting to pull out metal tethering stakes.

"This is the first time that we've actually found out that even securing it to the ground hasn't stopped them attempting to get into them," Doc community relations programme manager Annette Smith said.

The keas concerned were the "teenagers of the kea world", easily distinguishable by their darker green colouring.

"They leave their families and just hang out together ... they're quite ferocious when you see them on top of there [traps]. They're rocking and rolling. They're certainly not demure."

Ms Smith said the birds' persistence around the traps would have to be closely monitored.

"It's trying to keep one step ahead of the keas."

Last year, the Fiordland kea population was reported to be demonstrating regular tool-using behaviour, after being observed getting long sticks and poking them through the 50mm square entrance holes of stoat boxes, to spring the traps inside.

Kea are a protected species and it is an offence to harm or kill them.