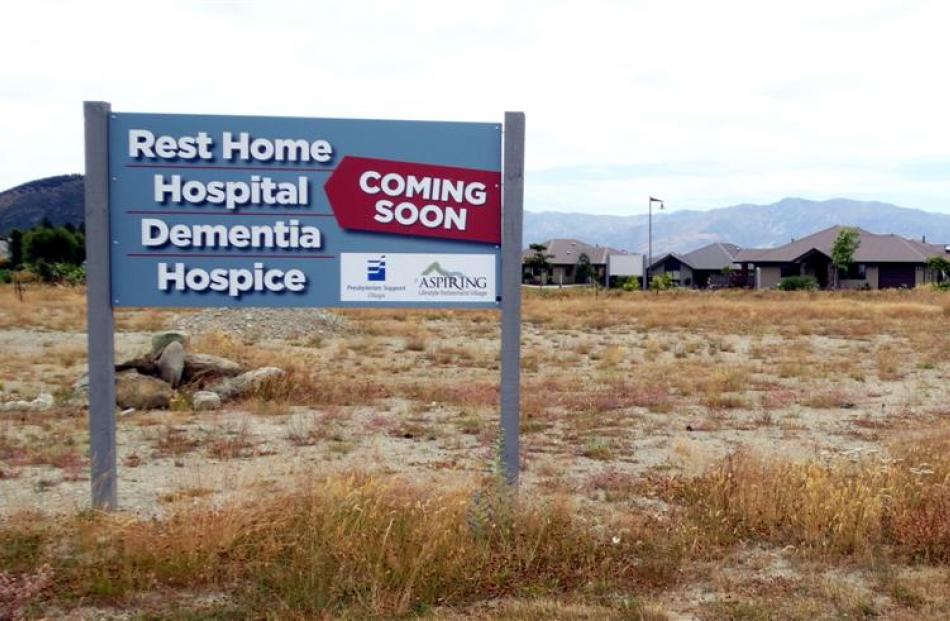 A new aged care facility next to the Wanaka Lakes Health Centre and Aspiring Lifestyle Retirement Village is due to open in mid-2016. Photo by Lucy Ibbotson.

A shortage of aged care services in Wanaka is driving elderly residents out of town and a new facility to meet increasing demand is still 18 months away from opening.

Wanaka's only rest-home, Elmslie House, is struggling to cope with the high demand for its 31 beds, which are consistently full.

Presbyterian Support Otago finance director Andrew Borthwick said the facility had been at capacity for about two years and pressure on its services was expected to worsen.

A recent survey of 72 older people in the Upper Clutha noted the number of those in the region aged over 65 increased 17.7% in the 2011-12 year, compared with the New Zealand increase of 4.5%.

A new aged care complex is planned next to the Wanaka Lakes Health Centre, in Cardrona Valley Rd, under a partnership between the developers of the Aspiring Lifestyle Retirement Village and Presbyterian Support Otago.

The facility will more than double Wanaka's supply of residential care beds for elderly people no longer able to live at home, housing 39 people - including a 20-room dementia unit - plus a palliative care suite.

However, Mr Borthwick said construction of that facility was not expected to start until midway through this year and it would take between 10 and 12 months to complete.

Elmslie House manager Nina Lunn said it was not uncommon for elderly family members to be sent to rest-homes in neighbouring towns because there was no space for them in Wanaka.

''It has been very hard for people to get in here.''

The waiting list at Elmslie House had about six names on it at present, Ms Lunn said.

A Luggate resident, who asked not to be named, reluctantly relocated her elderly mother from Wanaka to a rest-home in Alexandra last year after failing to find a room with around-the-clock care in Wanaka or Cromwell.

After being admitted to Dunstan Hospital, the woman had been unable to return to independent living at her apartment at the Wanaka Retirement Village, next to Elmslie House.

''We thought that that [living next door to the rest-home] would give her priority in there in a way, but when it came to it, they still couldn't do anything for her,'' her daughter said.

The woman had been third on the Elmslie House waiting list, ''but we needed something fairly urgently''.

While her mother was now settled in Alexandra, the situation had been distressing for her and the family.

''She really wanted to stay in Wanaka ... she didn't really know Alexandra and she doesn't know anybody in Alexandra.''

The Luggate resident had spoken with other people who had similar concerns about the lack of aged care in Wanaka.