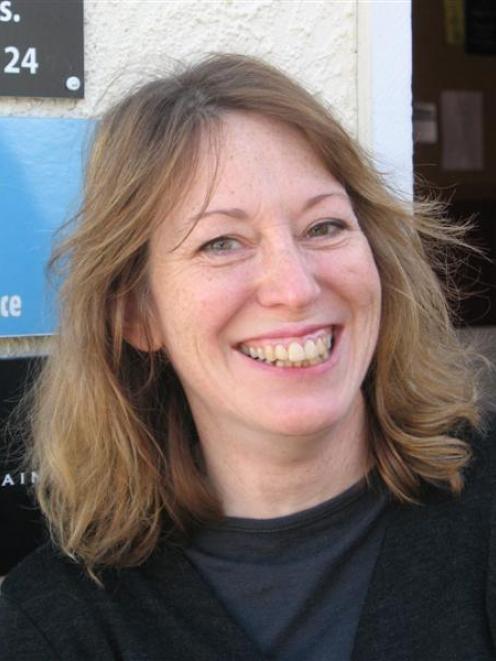 Dave Cannan caught up with her this week.

Margaret O'Hanlon has this great idea for a movie she wants to make.

It's all about a young chap from (wait for it) Lumsden who wants to be (wait for it again) a professional assassin.

Apparently, the guy can see a real career opportunity for cold-hearted killers in heartland Southland, but then, he is a bit of a nerd.

Pause... "Well, it is a black comedy," Ms O'Hanlon (47) says straight-faced, then bursts into another bout of infectious laughter.

It's been like this for much of the last hour, ever since I arrived on the front door of her Adelaide St house, saw all the drapes were still pulled tight, and wondered if 10am had been a bit early to arrange an interview.

Not so, said delightfully-polite daughter Violet, who showed me into the kitchen to meet her mother who was boiling the jug, searching for a tea-bag and trying to find bread for the toaster, a successful display of multi-tasking that would terrify most men.

En route I had walked past a framed copy of the civic award she was presented with by Mayor Clive Geddes a few nights earlier, right under a mammoth jigsaw mural showing the heart of New York city, a 7500-piece puzzle she had finished years ago and decided to make a feature wall of in her wonderfully lived-in lounge.

I compare that with the view from her lounge window (once the drapes are pulled) of the golf course at Kelvin Heights, resplendent in autumn colours, and the towering darkness of the snowless Remarkables as an ominous backdrop.

As I'm about to learn, these starkly contrasting landscapes pretty much sum up the life and times of Ms O'Hanlon - the young girl from the Big Apple who arrived in New Zealand's tourism mecca 19 years ago and decided to stay, despite her parents willing her to come back home.

Queenstown is "home" now and will always be so - although she eventually admits to a sneaking desire to "retire" to Dunedin, having spent an enjoyable time there recently kicking around her movie idea of a professional killer being based in Lumsden.

But retirement is a million years away for this effervescent 47-year-old. "I love it here.

"Queenstown still has a lot of potential. We have a theatre to build and we do have a lot of talented people here," she says as we walk, post-interview, down Stanley St heading for her "other home", the Queenstown Performing Arts Centre.

The large wooden building on the corner of Ballarat and Henry Sts used to be the manual block at the old high school but has, for many years, been the focal point for many community organisations including theatrical and dance groups, karate and scouts, pipe bands - you name it, performers all.

They have Ms O'Hanlon to thank for this facility - well, at least her boundless energy, determination and vision some years ago when she realised Queenstown "needed a theatre", a venue for the arts community, and others, to call their own.

A trust was formed, the council kicked in $10,000, various well-to-do shoulders were tapped and eventually $150,000 was raised to renovate the building, fix a floor that bounced up and down, keep a grand Grotrian-Steinweg piano in tune for regular use and make the facility wheelchair accessible.

"Yes, that is an accomplishment that I am very proud of - and the fact we've managed to keep the prices down," she says.

But we have jumped ahead of ourselves in trying to tell Ms O'Hanlon's story.

To get a better perspective and context, it is best to start when, as a young woman, having graduated from the La Guardia School in New York (made famous as the venue for the 1980s movie Fame and subsequent television series), she decided to head to Greenwich Village to pursue her dream of becoming a professional singer.

"I don't know why, I just did,"she explains when asked why she chose that career.

Her family was not particularly musical and no-one else took her ambitions very seriously.

But sure enough, there she was, in the Village, entertaining with her Bette Midler-style cabaret act, telling stories, singing songs and having the time of her life until she caught a bad case of the "travel bug".

It was 1988, the world was her oyster, but not the Bluff variety, because, she admits, she didn't plan on stopping here in little old New Zealand; just using a multi-stop ticket to pass through.

That is until the woman at the ticket counter surprised her by grabbing her arm and said, "You are making a mistake, young lady."

So she decided to come for two weeks and ended up staying for five months.

That's because she looked around Auckland one Tuesday night, discovered the so-called big city was pretty much shut, and thumbed a ride to the Coromandel Peninsula where she got the scenic shock of her life.

"You know, I could not imagine seeing so much beauty that had not been trampled on. The hot-water beach blew my mind because, well, there was no-one on it . . . back home, you had to pay to go on some beaches.

"So, I knew, there and then, I had to see the rest of this country. And the course of my life was altered forever."

She remembers getting to Queenstown somehow and being there on Christmas Eve, in a restaurant, where she was asked to get up on stage and sing.

Next thing, she was offered a job singing in the Dolphin Club by a co-owner sitting in the crowd, met her future husband Nigel Hirst, then left for the rest of her OE in Australia and Malaysia where she got malaria.

Then came an emotional tug-of-war with Nigel wanting her to come back to Queenstown and her father saying "come home" to New York instead.

Nigel was not only an accountant but a musician - they still play together in a band called The Master Blasters - and besides, he could tune the Grotrian-Steinweg piano.

They started the first open mike nights in Queenstown and that led to arguably her most high-profile role, running the hugely-popular "Queenstown Starry Eyed" annual talent contest for 10 years.

The local version of television's Stars in Their Eyes had a life of its own, she says.

Her policy of choosing new faces each year gave the show a freshness that ensured its viability.

But that perfection-seeking approach also took up increasing amounts of her time and eventually, two years ago, she called it quits.

There were other priorities.

Her young family, the community choir, teaching youngsters how to sing, co-writing a musical in 1999 called Kitchens (stay tuned, it's making a comeback) and working.

Time also to serve with Creative Queenstown and the Aspiring Arts and Culture Trust to make the most of Queenstown's entrepreneurial attitude and to work with the "tons of talented people" who come and go in this most transitory of towns.

And so when, last week, she turned up at the Memorial Hall along with all the other nominees for the Heart of the District awards and then heard she'd won a special civic award for her "huge contribution" to the local arts scene, she was "blown away" and just about speechless. Well, almost.

Now, about that movie in Lumsden...