Not quite ready to roll 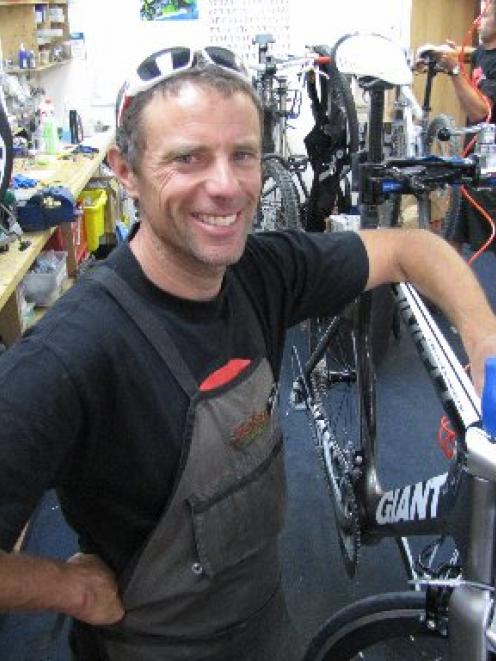 Racers Edge bike mechanic David Drake has about 900 bike checks to complete by next Friday for Challenge Wanaka, but only 25 bikes have come in so far. Photo by Marjorie Cook.
Wanaka is abuzz with activity as junior triathletes prepare for the opening of the Challenge Wanaka festival tomorrow.

At the same time, bike mechanics and race organisers are singing out for bikes and more volunteers.

The week-long festival starts at 8.30am tomorrow on the lakefront with the Junior Challenge and continues with a range of activities up to next Saturday's main event, a 226km Challenge Wanaka triathlon and its 113km sister race, the Lake Wanaka Half.

Up to 1300 athletes are participating next Saturday and as the clock ticks down, Wanaka bike mechanic David Drake is becoming increasingly anxious he will inundated with a late avalanche of bicycles.

Compulsory bike and helmet checks have been available at Racers Edge Bike since January 4 but late this week, just 25 of an estimated 900 cyclists had brought their treadlies in.

"It is not enough. Sooner rather than later. Avoid the scrum," Mr Drake said.

His manager, Lucy Fullerton, was also hoping cyclists would not leave bike checks to the last day, as all bikes must be racked before 6pm on Friday.

Meanwhile, Challenge Wanaka race director Victoria Murray-Orr needs more volunteers for next Saturday who can kayak on the swim course, help on aid stations and be course marshalls.

Hundreds of volunteers have already signed up and their efforts will be recognised by a donation from the Challenge Wanaka Sports Trust to the Upper Clutha Children's Medical Trust.

"We are not at panic stations but we just need more for race day, helping with everything and anything," Mrs Murray-Orr said.

While team entries for the long-distance triathlon have dropped this year to about 45, the total number of athletes participating in either the full- or half-distance race had increased by about 80 to 1300, she said.

More international athletes than ever before had also registered for the race.

"With individuals, they tend to have a mind-set to race, come what may.

"But if you were a team cyclist, cycling at 5km an hour into a head wind for three hours, it was not a good experience.

"They might think 'I don't want to do that again'."

She hoped for better conditions so the scenic course could redeem itself.

In the professional field, eight men and six women are racing for line honours and a stake in the $80,000 prize pool.

Mrs Murray-Orr said both professional fields "look awesome" and the 2011 men's champion, Jamie Whyte, of Auckland, would not be letting his title go without a fight.

"It could be anybody's race. There could be five or six who could win it," she said.

The 2010 champion, Richard Ussher, of Nelson, has withdrawn from the field because of his multisport commitments.

Despite being hit by a car while on a training ride earlier this month, Doe still has his sights set on the podium.

The women's favourites include Gina Crawford, of Christchurch, returning to the sport after having her first baby last year, and Australians Christie Sym and Nicole Ward.

The 2011 women's champion, Belinda Granger, of Australia, did not enter and top Australian female athlete Rebekah Keat has decided to pull out because she has not recovered satisfactorily from a knee injury.