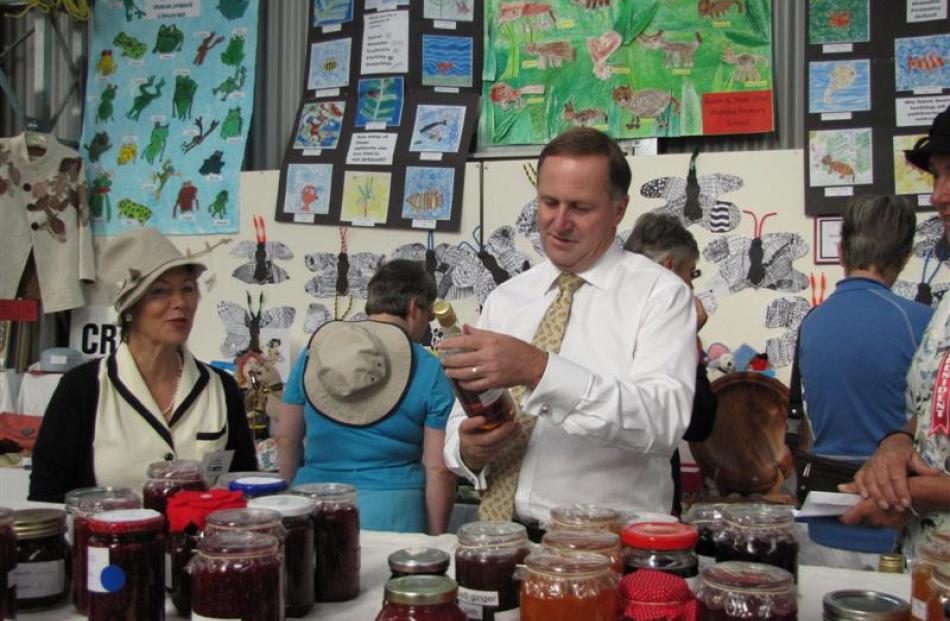 Prime Minister John Key admires a bottle of wine with Wanaka's Jan Allen (left) at the home-industry section of the Upper Clutha A and P Show in Wanaka yesterday. Photo by Marjorie Cook.

"It's hard to eat for your country but someone's got to do it," Mr Key said, as he primed his knife and fork to help BMX world champion Sarah Walker and chefs Graham Hawkes and Ben Batterbury judge the Glammies awards.

"He's been looking at all the shiny tools, eating food he would normally not get away with at home, and is thriving on talking with kids and anybody," Mrs Dean said.

Mr Key was a popular guest and spent most of the day posing for photographs, shaking hands and talking.

He became so caught up in conversation with retired wool grower Rob Matthewson, of Wanaka, and wool judge Kevin Waldron, of Dunedin, it took some time for him to finish the bacon buttie he purchased from the Lake Hawea Netball Club.

Wanaka 6-year-olds Harry Anderson, Harry Pelle and Louis Darby were typical of the many children eager to meet the Prime Minister, discuss rugby and demonstrate how fast they could run.

Elmslie House resident Agnes Gray also enjoyed talking with Mr Key, explaining she had been to nearly all of the 75 shows.

"He was very friendly. I suppose he's got to be," Mrs Gray said afterwards.

The Crown Pastoral Lease Amendment Bill was before Parliament and there was general acknowledgment of the "highly desirable environment" for growing merino wool, Mrs Dean said.

"We can't grow enough of it.

There's been too much land retired from production under the previous Government," she said.

The show continues today with dog trials and equestrian events beginning at 8am and 8.30am, respectively.

There is a full programme of entertainment and livestock competitions. The Jack Russell race starts at 12.30pm, the grand parade begins at 12.45pm and All Black coach Steve Hansen then opens the show.

The Glammies results were not available before deadline yesterday.