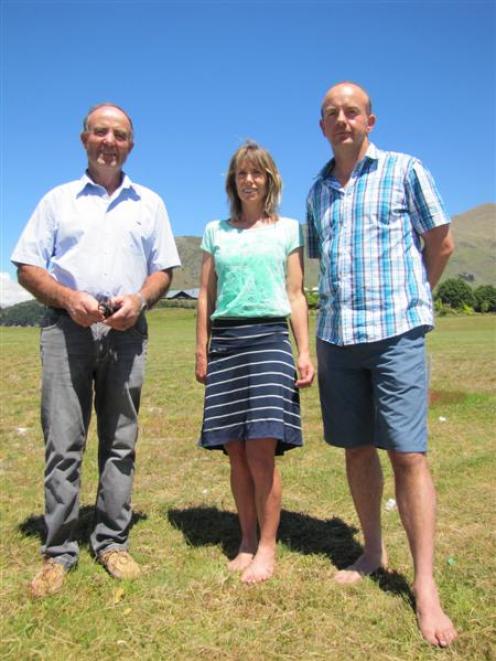 Residents of a rural-residential part of Wanaka (from left) Hugh Simmers, and Cath and Matthew Davidson, object to neighbouring land being subdivided for ''low density residential'' housing. Photo by Mark Price.
Homeowners in a rural-residential part of Wanaka are up in arms over the size of sections a developer is planning for a new housing development on 3ha of land next door to them.

Willowridge Developments Ltd, owned by Allan and Elizabeth Dippie, is seeking consent for 27 ''low density residential'' sections ranging in size from 780sq m to 1195sq m, as an extension of its West Meadows subdivision on the southern side of Wanaka.

In the Queenstown Lakes District Plan, the land is zoned rural residential allowing for a minimum section size of 4000sq m.

Studholme Rd residents Matthew and Cath Davidson and Hugh Simmers were part of a small group of residents who took their concerns to the Wanaka Community Board yesterday.

The board resolved to seek more information.

Mr Davidson told the meeting their property had rural residential land on three sides and rural lifestyle land on the other.

''We bought this land as we understood being surrounded by like-zoned land would ensure the preservation of its fabulous rural amenity and visual values.''

He regarded the block of land where the development was proposed to be a ''buffer'' from low density development.

Mr Davidson said they expected no more than six rural residential blocks would be built on the land.

He described Willowridge's plans as ''a massive breach'' of zoning rules.

''This is a zone change dressed up as a resource consent application.

''It is in effect a private district plan change.''

In its resource consent application for stage 5 West Meadows, Willowridge said it had made submissions to the district plan review to rezone the land for low density residential purposes.

''However, the demand for low density residential land at this location requires that a resource consent application is appropriate to bring the land forward for development ahead of the district plan review process.''

It proposes the development be treated as a ''non-complying subdivision'' under the district plan.

It also calls for building sites closer to boundaries than in rural residential zones.

Mr Simmers said the development was ''an ad hoc non-complying proposal'' and he pointed out there was plenty of suitable land within the town for new housing.

''So why approve this illogical proposal?''Mr Dippie told the ODT yesterday demand for sections had been increasing in recent months.

He said it was ''quite common'' for neighbours of new developments to object.

''It always seems worse than it actually ends up being.''

Mr Dippie said Willowridge would ''work with the neighbours and consult with them'' as it had done on other developments over 20 years.

''Sometimes the concept of change is a bit threatening to people and we have to work with people to understand their concerns.''