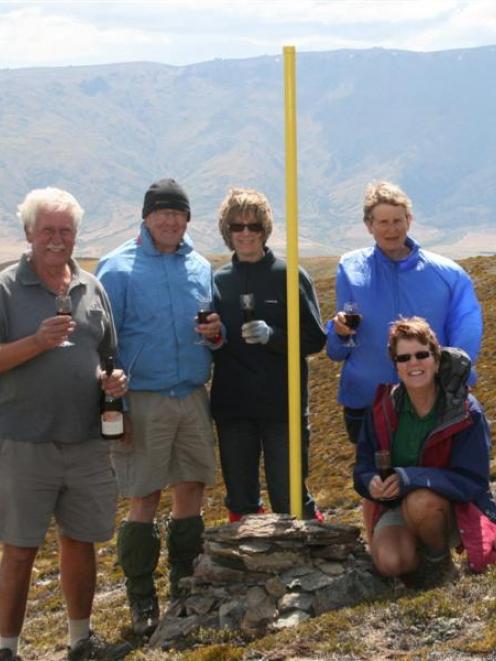 The couple and their friends erected a cairn at the point on Monday.

It is 1km south of Castle Rock and 7km north of Leaning Rock on the Dunstan Range, on the property of Northburn Station owner Tim Pinckney.

The couple became interested in locating the point after buying nearby land for their vineyard, Bannock Brae Estate, 12 years ago.

It is very near the boundary of Northburn and Bendigo Stations - the Browns were surprised to learn from Bendigo farmer John Perriam it is only about 500m from where musterer Ann Scanlan found the famous merino sheep of Tarras, Shrek, in 2004.

To be sure their hunch was correct, the couple contacted Land Information New Zealand and the geography department of the University of Otago.

"Surprisingly, a call to Linz elicited the response that they didn't know where it was, but they could survey it at the cost of megabucks. That was not an option.

A call to the geography department of Otago University came back with the reply that they didn't know where it was either, but "in the Dunstans sounds about right'," Mr Brown said yesterday.

Mr Crawford spent hours on Google Earth investigating all the possibilities and on Monday took a hand-held GPS system into the hills to find the point.

"Nowhere else in New Zealand is a piece of land so far from a coast. Unfortunately, this point is at a very inaccessible part of the country," Mr Brown said.

The point was about 1500m above sea level and provided spectacular views to Lake Hawea and Alexandra, but was an all-day tramp or a rugged ride in a four-wheel-drive vehicle, he said.

Although there were nearby tracks and a conservation area, Mr Brown said it was best for any visitors to check with both farmers to make sure they were not going to disrupt farming operations.

For a large part of the year, the terrain would be virtually impassible, he said. "You would have to be outdoors equipped. It is not a casual afternoon's drive."