Veteran takes flight in his stride 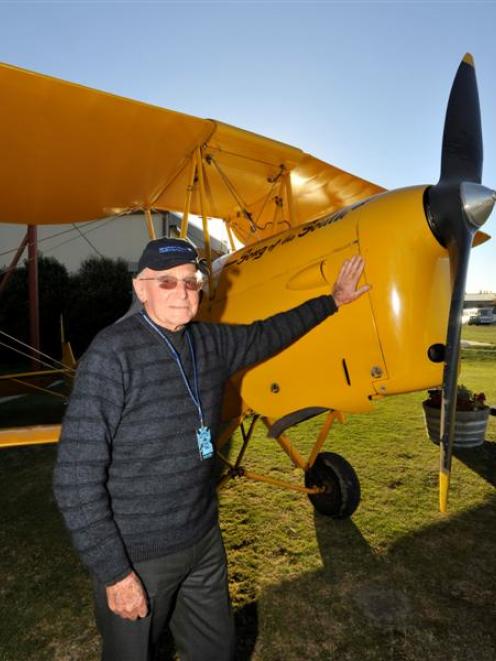 He has rarely travelled in one and had never been to an airshow before visiting the Warbirds Over Wanaka International Airshow yesterday.

The only time he sorely missed the presence of an aircraft in his life - specifically an air force - was when he was a 22-year-old New Zealand infantryman on the island of Crete during World War 2. The Germans totally dominated the skies.

Yesterday, Mr Swinburn's son-in-law, Rod Price, of Arrowtown, signed him up for a free trip in a Tiger Moth, offered by Classic Flights to all returned service personnel aged over 90.

It was a new adventure he calmly took in his stride, announcing with a fair old grin afterwards "It was pretty good." Mr Swinburn, who was raised in Palmerston North, served in the New Zealand Army's 19th infantry battalion and armoured regiment.

He has had so many near-death encounters with bombs, gunfire, mines and grenades he does not bother to mention some of them, but one of the worst came in Crete, when he was hit in the throat (and other parts of his body) in Crete by the fragments of an Italian hand grenade.

"I was fortunate. If it had been a German grenade I wouldn't have lived. The Italian grenades were made from aluminium. It didn't do all that much damage.

It was blast, mainly. But I have still got some fragments inside," Mr Swinburn said.

At that stage he held the rank of second lieutenant. His throat injury rendered him incapable of speech for some time - "the doctors told me a quarter of an inch either way and it would have been curtains".

He was evacuated from Crete on a navy minesweeper, rating himself lucky to get off the island because the navy was incurring even more casualties than the infantry at that time.

After he recovered, Mr Swinburn rejoined his battalion just in time to take possession of Ruweisat Ridge during the first battle for El Alamein.

A German counterattack saw most Allied Forces there taken prisoner, except Mr Swinburn and a few others.

He realised he had no troops under his command and quickly walked off.

"I felt free to walk home. I walked off through a minefield and ended up with the Indian troops and finally got back to the 19th. Fortunately, the Indians gave me a lift back in one of their pickups so I was dumped at the rear HQ of the 19th ... One of the platoons and a commanding officer also got away. I remember four members of battalion HQ following me but they were shot ... They [the Germans] could have shot me then, if they had wanted, but I was a couple of hundred yards ahead. I guess they had other things on their minds, that particular tank. They had all the infantry to round up," Mr Swinburn recalled.

He could have retired during a home furlough, because he was technically medically unfit, but he felt there was nothing for him in New Zealand at the time and returned to the war.

Eventually, he ended up in charge of the C company, a squadron of 16 tanks, and ended up in Trieste.

When asked by an "excited" Yugoslav to blow up the doors of the Courts of Justice, the New Zealanders happily obliged.

Mr Swinburn returned to Napier after the war and worked as a chartered accountant until he was 72.

He and his late wife Pauline have a son, Aleck Swinburn, of Hawkes Bay, and daughter Alison Price, of Arrowtown.

He is now the semi-retired "head gardener" of Tourere Station at Waipukurau.