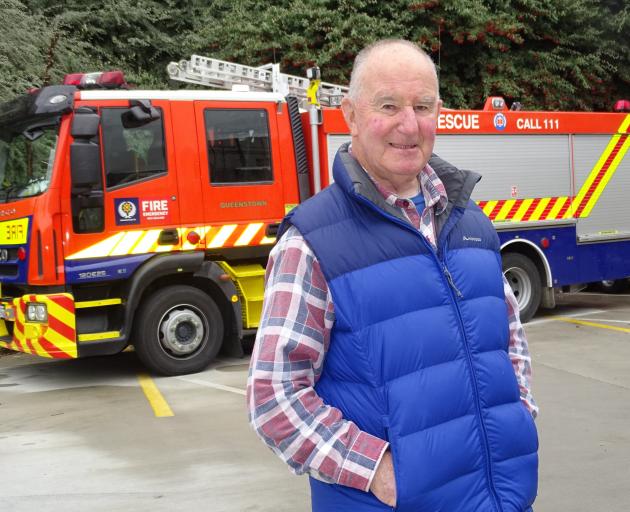 Former Queenstown Volunteer Fire Brigade chief fire officer Bob Robertson (80), whose 60 years’ service to the brigade will be acknowledged in Queenstown tonight.PHOTO: TRACEY ROXBURGH
Tonight in Queenstown, Bob Robertson’s unprecedented service to the resort’s volunteer fire brigade will be acknowledged during the brigade’s annual awards. He tells Tracey Roxburgh the past 60 years have gone by in the blink of an eye.

Bob Robertson comes from a line of men who each stamped their mark on Queenstown's history.

His great-grandfather, J.W. Robertson, was the resort's first mayor.

His "adopted grandfather", Captain Jack, was the captain of TSS Earnslaw when it made its maiden voyage from Kingston to Queenstown.

Mr Robertson's father was the resort's town clerk - the equivalent now of the council chief executive - from the mid-1940s until 1956.

And now he takes his place in the history books, becoming the longest-serving volunteer firefighter in the Otago-Southland region, having spent 60 years responding to fires and other incidents all over Wakatipu.

He was talked into joining by a man who worked for his father at the Mountaineer Hotel when he was a 19-year-old.

Back then there were 15 volunteers - now there are 50 - and a waiting list to join.

"I was probably lucky to get in ... it was pretty sought after.

"If you were in the brigade you were pretty well liked." 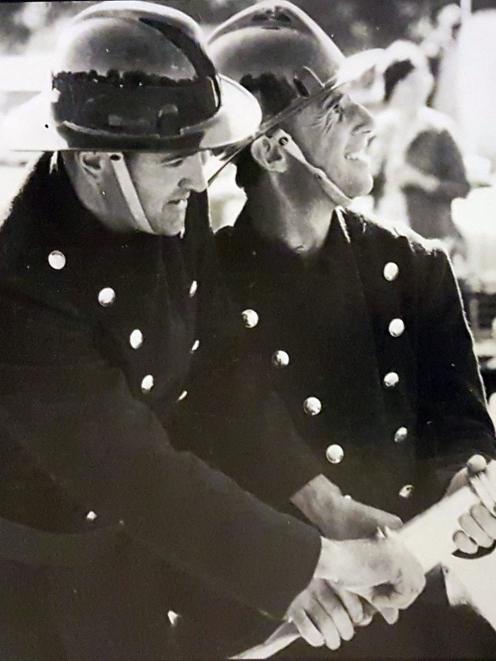 Mr Robertson (right) pictured with Brian Smith during the Queenstown Waterways Competition in 1974.PHOTO: SUPPLIED
During early days, firefighting was a simpler affair, he said.

The fire truck was a Ford V8, ex-army vehicle, with a Scammell kick-start petrol-powered pump on the back "probably no better than a hose reel".

"All you did was run your hoses from a stand pipe in the ground. It never went back through a truck to be controlled ... it was all straight off the stand pipe and into the fire."

Further, the brigade was only called to fires - and there were plenty of them.

One of the most memorable for Mr Robertson, who turned 80 last month, was the Apex Chalets fire on January 2, 1974.

The brigade pumped a swimming pool dry extinguishing the flames, but that is not why it stuck in Mr Robertson's brain.

"My wife [Fae] was in the home having a baby at the time."

Mrs Robertson, to whom he has been married for more than 50 years, also played a massive part in the brigade, heavily involved for a long time in the "Ladies Committee", responsible for organising competitions, conferences, and the men.

"They were really busy - without the women in those days doing the things that we were lined up to do it would have been just a shambles."

In 1986, after 25 years' service, Mr Robertson was appointed chief fire officer and his first big job after that was the almighty Coronet Peak base building blaze that July.

Icy conditions made it difficult for the brigade to even get to the building, where no sprinkler system had been fitted, and bitter temperatures caused water to freeze in the fire hoses.

Mr Robertson remained chief for 27 years. There were huge changes during that time, not least of which becoming first responders and being called to more than just fires.

"Anything you got called out for, you went to ... I've been to a few cats up trees [and] a few bizarre things - the bizarre things you probably wouldn't want to put in writing."

Current chief Andrew Bary, a brigade member for about 17 years, said Mr Robertson left huge shoes to fill when he stepped back to become a support person.

"He was a really good chief - highly regarded, well-respected.

The Queenstown Volunteer Fire Brigade pose on the recreation ground after taking delivery of the TK Bedford fire appliance in the late 1960s. Mr Robertson is pictured in the back row, fifth from the left. Former mayor Warren Cooper is in the front row, third from the left.PHOTO: SUPPLIED
"When you come in as a junior in an organisation you're not close to, probably, the grittier issues, but he was a well-respected chief, right across the brigade, something that's no mean feat because it's a diverse group of people.

"Queenstown's always in the spotlight and Bob set out how he wanted things done and he held everyone accountable and I think that put the brigade in great stead for where it is today," Mr Bary said.

"To give this amount of continuous service to [Fenz] and the Queenstown community is a hugely impressive feat."

"I've just done it - it seems a short period of time.

"I've thoroughly enjoyed being a member, but it is time to go.

"It's like everything, isn't it? You have to give it away eventually."

When asked what he would do with his spare time, there is a chuckle before he quips: "I haven't got any.

"I seem to be busier than ever."