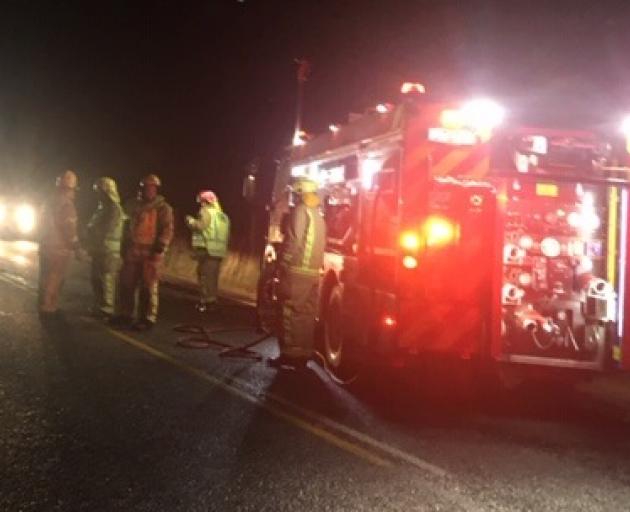 Fire and Emergency New Zealand at the scene of the fatal crash near. Photo: Louise Scott
A Queenstown man killed in a crash on Thursday night has been described by his boss as a "hard charger" with a "wicked sense of humour".

Police have not yet named the 38-year-old tradesman as they work to contact his family overseas.

He died at the scene after the van he was driving collided with a house being carried on the back of a wide-load transporter truck, about 8.45pm, on State Highway 6, near the Crown Range turn off.

"He loved his motorbikes, had a wicked sense of humour, and was a hard-charger in all aspects of his life; wasn't afraid to say what was on his on mind," the owner of the company where he worked said.

"He was a phenomenal [tradesman]. We've lost a really talented individual. We've lost a leader on the team, a comrade and someone I'd consider a friend. It's very tough.

"We're completely floored, the entire team. We've shut down for the day and come to [the Queenstown bar] he frequented.

"It's so sad when you realise he's not coming to work anymore."

It's understood the victim was relocating to a new home when he crashed.

Another friend said: "Everyone who knew him is absolutely devastated."

Senior Sergeant Paula Enoka, of Queenstown Police, said yesterday the man was travelling alone in the van, away from Queenstown, while the transporter was coming towards the town, she said.

"We still have a number of ongoing inquiries in relation to investigating the vehicles, speaking to witnesses and formal identification of the person hasn't been completed."

The Wellington-based police media team refused yesterday to give any further details on the identification process or the investigation.

It is the second fatal accident on that stretch of road in recent years. Australian tourist Susan Maree Cullen (49) died less than 2km away in February 2017, in a head-on collision with Malaysian student Jiaxuan Goh (23).