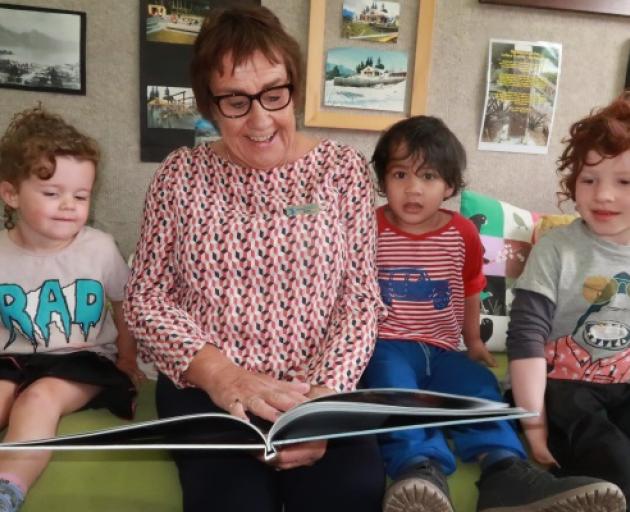 Immensely popular with pupils, parents and fellow teachers, she’s stepping down after 31 years as the kindergarten’s inaugural head teacher.

In her time, she’s seen about 2100 toddlers come through the gates along with 15 teachers and five support staff.

"I’ve been so lucky, you couldn’t get a better place to work," she says.

"It’s a beautiful environment, right in the heart of town, and the grounds are amazing, and it’s all thanks to the community."

The community first showed its support by raising almost $70,000 to help build the facility through Queenstown Rotary’s ‘Build a House in a Day’ project, and that support’s continued, Hogg says.

"I really like children to respect what they’ve got, because it is really, really special."

She adds: "I think the biggest thing for me is developing resilience in children.

"When they come to you with a problem, let them think about it — don’t jump in and sort out the problem for them.

"As an adult, you’ve got to have resilience, so that’s where it’s got to start."

Hogg says she’s been fortunate with the "fun" and "passionate" teaching colleagues she’s had, while so many parents have become friends.

"I think I’ve taught most of my friend’s children."

She doesn’t believe children have changed over her time at the kindy, even though the world has, massively.

"When I started, technology meant the telephone or the fax machine, that was it — it’s been a huge learning curve for me.

"And gone are the days when children used to walk to kindergarten."

Ask her about the increased focus on health and safety, she says, "don’t mention the words, it is just crazy".

"If a child falls over and hurts their head, you’ve got to fill out a whole form and send it to head office.

"If you put a plaster on their knee, you’ve got to write it up and get the parent to sign it at the end of the day."

Now 66, she says it’s "time for someone else to take the reins".

In her retirement, besides golf, she’ll maybe take up some new interests.

She’s also be up for any relief teaching at the kindy.

"I’ll always take an interest in the kindergarten."