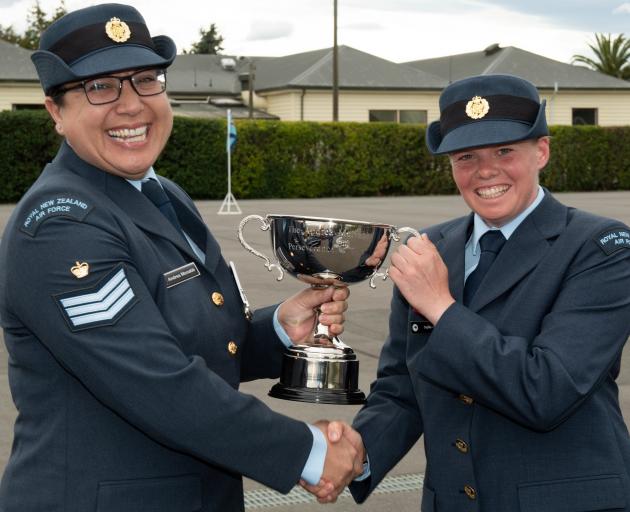 Aircraftman Aitken (21) was awarded both the Lawson Cup and the Andrea McNabb Perseverance Cup after she graduated from the 14-week recruit training at Base Woodbourne.

The Lawson Cup and Warrant Officer of the Air Force coin is awarded to the best all-round recruit.

The Andrea McNabb Perseverance Cup is awarded to the recruit who best demonstrated the ability to overcome challenges and persevere in the face of adversity.

A helicopter load master under training, AC Aitken said she decided to join the RNZAF as it brought together two interests.

"I wanted to work in a challenging environment that brought together the two things I am passionate about: helping people and aviation."

She was looking forward to the next steps of her career, which included more courses which would qualify her for her new role.

"I’m expecting the real hard work and fun to begin now. I am very open-minded about my future.

She said she really enjoyed the practical elements of the recruit course, especially the longest day.

The longest day is for instructors to see how resilient people are under pressure over a long period of time, both physically and mentally. Longest days typically start before dawn and end at dusk.

"These exercises allow you to truly see yourself and make you push through your previously unknown barriers."

AC Aitken advised anyone thinking of enlisting in the New Zealand Defence Force they should "just go for it".