Love was in the air over Queenstown today when an Australian tourist staged an elaborate marriage proposal for his long-time partner.

Sydney-based doctor Nurojan Vivekanandamoorthy proposed to HR specialist Suge Sritharan at 1500-ft, during a skydive over the Kiwi adventure capital.

What Suge had thought was an impromptu four-day break to New Zealand was all part of an elaborate plan by Nurojan.

The surprise proposal had been in the planning ever since Australian travellers were given the green light to jump the ditch as part of the Transtasman bubble. They booked flights as soon as they were able to.

However before getting Suge to agree to marry him, Nurojan first had to convince her take part in the jump.

"She had quite a few butterflies but I was relieved and very happy when she landed," said the Sydneysider. "She was completely taken by surprise!" 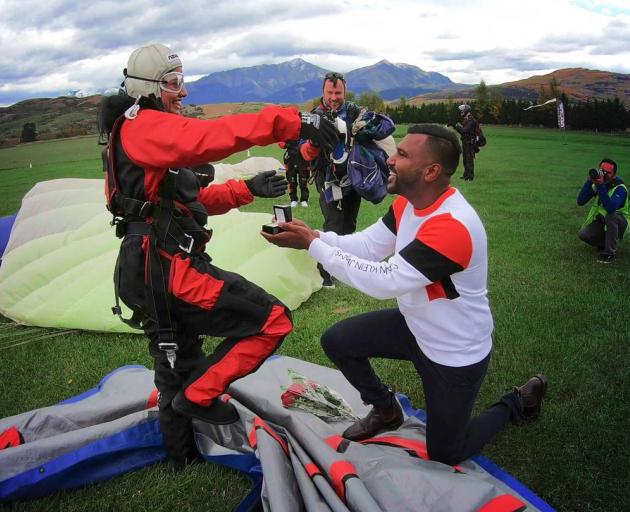 Nurojan first had to convince girlfriend Suge to take part in the jump. Photo / Supplied

He popped the question during the jump with operator NZONE Skydive, after preparing the drop zone with some flowers, a ring and a banner, reading 'Will you marry me?"

Of course, she said "yes!

"We've always wanted to come to New Zealand so when the bubble opened up we booked a trip to Queenstown determined to make the most of our four days," said Nurojan.

The couple are hoping to travel to Sri Lanka for a wedding with Nurojan's family at some point next year, but are thrilled that travel is beginning to open up for Australians.

The proposal was a complete surprise to Suge, who thanked the operator for helping plan the elaborate mid-air proposal.

"We'll always remember this day and the NZONE experience, and thanks to them for helping make it all happen!"

'Will you marry me?' Nurojan's Drop Zone message. Photo / Supplied

While numbers of trips across the ditch are a fraction of their regular numbers, fearless Aussie tourists like Nurojan and Suge are already jumping in with both feet.

"We've been seeing small but positive numbers of our Australian friends since the bubble opened, including around 35% of our customers today," said Skydive Queenstown General Manager Clark Scott.

"We wish Suge and Nurojan all the best for their future together!"

The couple plan to fly back to Sydney on Monday, after an enjoyable long-weekend in the South Island.