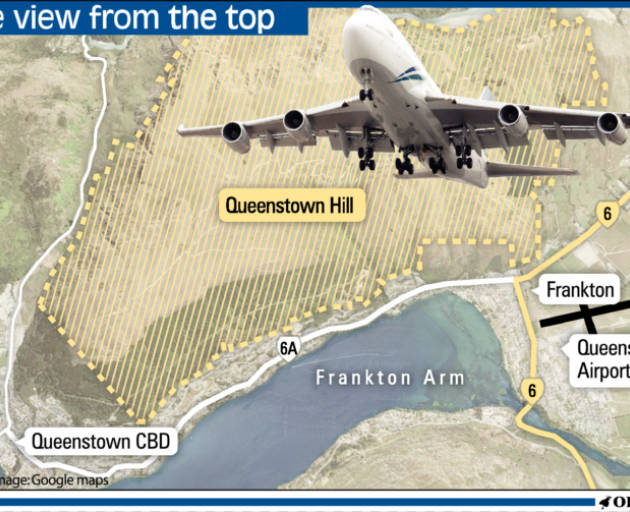 A day after a $2 million plan to insulate 150 homes from aircraft noise was unveiled, Queenstown businessman Sir Eion Edgar said the town's airport should be moved.

The millionaire investor and philanthropist wants the airport relocated to vacant land on Queenstown Hill.

The 907m-high hill overlooks the airport on Frankton Flat.

Sir Eion yesterday described Queenstown Airport Corporation's two-year plan to mitigate aircraft noise as ''a Band-Aid on an ongoing problem that's only going to get worse''.

The plan demonstrated why it made sense in the long term to relocate the airport, he said.

''They're just going to have to keep paying people.

''What we need badly is to be able to extend the times so we can have evening flights and that again will be difficult because there will be more and more people requiring sound-proofing,'' Sir Eion said.

Aircraft noise was becoming ''excessive'' where he lived in Kelvin Heights.

The suburb lay in the airport's flight path but outside its noise boundaries.

It was logical to move the airport on to the hill in the next five to 10 years, he said.

''But they do now have to take a quantum look at where we are because the demand and the convention centre and all those things compound the growth of numbers.

Wind, snow and ice, as well as altitude and terrain, were among the factors that ruled it out.

He said relocating to the hill was not aeronautically feasible, nor part of the corporation's mandate.

Queenstown Hill is also known as Te Tapu Nui, or ''very sacred'', and is a significant place for Maori.

The hill is an uneven triangular rock with urban houses on its southwest face but is otherwise barren.

It fans out between Gorge Rd and Frankton Rd and is popular with day walkers.

Mr Paterson said a study of alternative locations was made in 1995 and Frankton Flats was identified as the most logical place to have an airport.

The airport management team's mandate was to develop the airport for the benefit of the community.

''Queenstown Hill wouldn't work because of its height and obstacles, and it's just something we're not looking at,'' he said.

''We're on Frankton Flats today, we have a growth path.

''We've been working on that growth path for the past six years with our noise boundary work.

''It's been reviewed extensively by the Environment Court and we're in a position now where we're going to help our nearest neighbours with sound insulation ... based on the fact we are growing and there will be more aircraft.''