Two members of a group injured after a tree fell on them at Queenstown have been discharged from hospital, but another remains in serious condition.

The tree toppled on to the group of five yesterday at the Shotover Jet site as wild winds battered the area.

Emergency services, including three helicopters, rushed to the Arthurs Point Rd site at 1pm, and four patients were transported to Dunedin.

A Dunedin Hospital spokeswoman said one child was in a serious and stable condition.

Two people - one adult and one child - were in stable conditions.

One adult had been discharged.

Another had been discharged from Lakes District Hospital.

Police are continuing inquiries into the incident.

The MetService had issued a severe weather watch for the Southern Lakes area, saying westerly winds could rise to severe gales in exposed places.

Some ''big jumps'' and ''much stronger winds'' were logged at more exposed recording stations.

The large, ageing willow tree gave up in the strong winds, he said, collapsing where a family was watching the Shotover boats.

''They've had no chance to get out of the way of the falling tree.

''It was the wrong place, unfortunately, at the wrong time, and it was a tree that has been there for a long time.'' 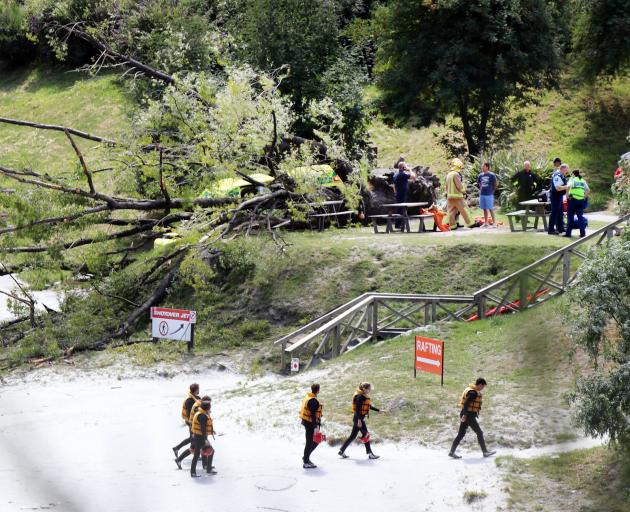 Emergency services work around a downed tree, as rafters return from a trip.
Det Snr Sgt Inglis praised the response of Shotover Jet staff and bystanders.

''Obviously, there was a large, heavy tree lying on top of the family and to extract them was not easy.

''They did a great job of getting the tree up and off the family and administering medical assistance while they were waiting for ambulances to arrive.''

A Department of Conservation spokeswoman said the tree was on conservation land, in an area subject to a commercial lease.

''We are currently determining who is responsible for maintenance of trees in this location.''

Ngai Tahu Tourism, which owns Shotover Jet, was providing support ''to all those affected and their whanau''.

''We are also supporting our team who were understandably shaken by today's events.''

Shotover Jet remained closed for the rest of the day.