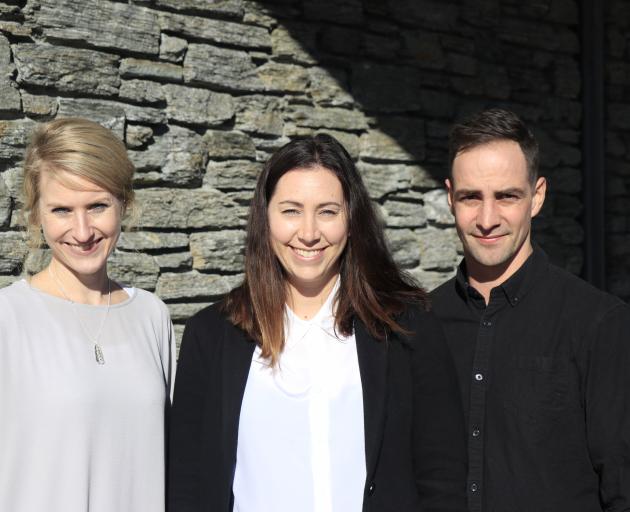 Lauren Christie (left), Melanie Halliday and Josh Gibbons. PHOTO: PAUL TAYLOR
Queenstown is trapped in a "vicious cycle" of unaffordability, the chairman of its mayoral housing task force says, as a group of house-hunters launches a scheme to cut costs.

Real Estate Institute of New Zealand figures released on Tuesday show the district is the third most expensive place to buy in New Zealand. It has a median house price of $908,000.

Last Thursday, a 100sq m cottage on about 1000sq m of highly developable land near the CBD, sold for $3 million.

Cr MacDonald said: "The biggest single challenge is our land price and the second is the cost of construction.

"You're paying a premium to construct a house here, because labour is expensive and materials are expensive.

"The problem of hiring staff is getting worse and worse, so the pressure is building.

"It's a vicious cycle, absolutely, because if the builder has to bring people into town to build your house, the cost of your house goes up, and on we go."

In a bid to beat the sky-high market, a group of house-hunters has announced plans to build a "co-op urban village", mimicking successful similar schemes in Australia and Germany.

The concept takes profit-driven building developers out of the picture, possibly slashing costs by as much as $150,000 ahouse.

"It's not an affordable housing scheme, just more affordable," she said.

"There are many people who don't meet the criteria for help from Queenstown's housing trust but are still struggling to buy a house.

"Basically, by taking out the developer we can save the profit margin - about 20%.

"We can invest in quality design, energy efficiency ... we can have more control over the end product."

The group plans to self-develop 15 to 30, medium-density, three- or four-storey, terrace-style homes, having some shared communal spaces. It is eyeing land in Frankton.

"Anything creative like this helps. You're bringing together like-minded people and the thing I like about this model is it creates community."

The group will form a company having a board and shareholders. Decisions will be made by all on a majority-rules basis.

Then, once titles are issued, the shareholders take ownership of the individual properties themselves. They will also form a body corporate.

"It's a fantastic example of what can be achieved by people-driven development versus profit-driven," Mrs Halliday said.

The group will draw on the expertise of those involved and compensate them for their work.

Mrs Halliday admitted there was more risk than in putting a deposit into buying off-plan. The homeowners were taking on the developers' financial risk.

Meanwhile, construction has started on the first six homes of the Queenstown Community Housing Trust pilot scheme, Secure Home, in Shotover Country. The trust will retain ownership of the land, which is leased on 99-year terms by the property owner.

Such a scheme was one of the key recommendations of the task force.