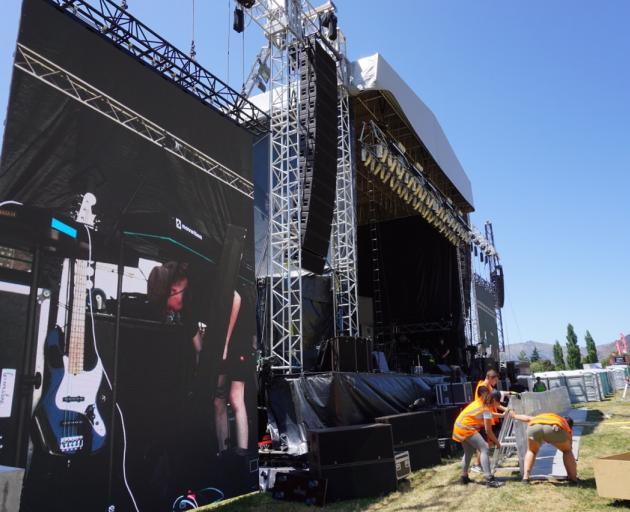 Workers put the final touches on the stage area yesterday. PHOTO: GREENSTONE ENTERTAINMENT
After a week’s preparation, the venue for Queenstown's biggest concert of the year is ready for its stars to hit the stage.

The gates for the 10th annual Gibbston Valley Winery Summer open at 9am today, and New Zealand warm-up acts will arrive on stage about two hours later.

They will be followed by the big acts from noon: Smash Mouth, Creedence Clearwater Revisited, Anastacia, George Thorogood, and British rocker Billy Idol.

Promoter Amanda Calvert, of Greenstone Entertainment, said it had taken a week to take the venue "from greenfield through to what everyone will see tomorrow".

All the artists had arrived by yesterday and carried out sound checks.

In an Instagram post yesterday, pop star Anastacia wrote she had travelled in three planes for 34 hours to get to Queenstown, but was not complaining.

"Once I finally arrived, well worth the long travelling.

"Honestly, the beauty of Queenstown is remarkable."

Ms Calvert said summer had "finally arrived" in time for the concert, and sunshine and temperatures in the mid-20s were forecast.

She urged concertgoers to be prepared, including wearing a hat, using sunscreen and keeping well hydrated throughout the day.

Allow plenty of time to get to the venue, and organise a designated driver if planning to drink, she said.