Cost 'horrendous', but plenty of pride in project 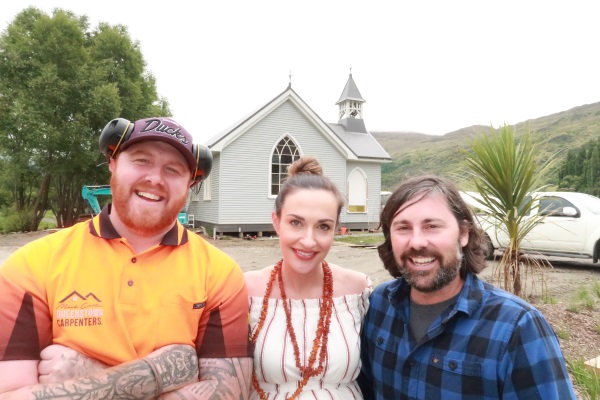 Queenstown Carpenters' Mark Taylor, left, with Hollis and Brett Giddens. Photos: Mountain Scene
Planner Brett Giddens is not a church-goer, but he’s gone for a church for his new Queenstown office. He tells Philip Chandler how he and his wife Hollis have transported, then repurposed, a historic Southland church, and reveals what else he’s planning to ring in there in the new year.

He and his wife Hollis, however, still weren’t happy, ‘‘so we thought, ‘let’s see if we can find a relocate’’’.

Giddens says after a lead from one of his staff, he found the Waikaka Presbyterian Church parish in Eastern Southland intended vacating its building, which had been completed in 1911.

‘‘It was likely the building would have been knocked down.’’

He and Hollis bought the building, which the parish had deconsecrated as a church, and had it transported, in three sections, the 172km to Malaghans Rd, nine months ago.

Moving the two main sections through the aptly-named Devil’s Staircase, on State Highway 6, was a treacherous exercise.

Just how treacherous was shown on a recent episode of TVNZ 1’s Moving Houses. 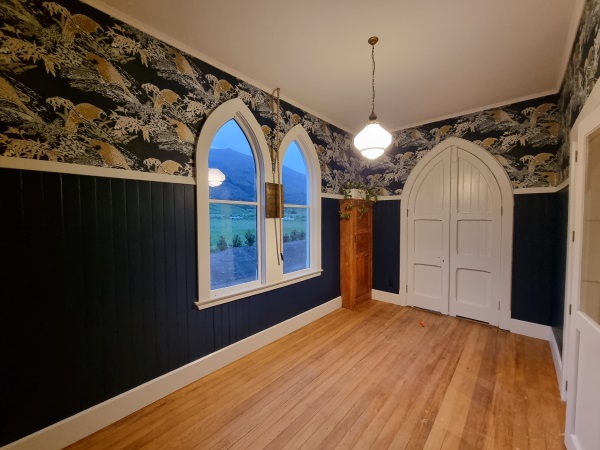 The former belfry/vestibule is turning into a boardroom.
Starting from the top, a new roof was put on, a lowered false ceiling was removed, the original dark-stained rimu ceiling was exposed, and insulation was placed in between.

A mezzanine space was also opened up, and windows were double-glazed.

In the main hall, the original floor had sloped from one end to the other, so the floor was levelled, creating ‘the stage’ below the original feature stained glass window.

The stage front was then clad in brass.

Due to borer, quite a bit of the rimu floor was replaced.

The builders also had to deal with wasps and cluster flies.

‘To use a church pun, it was a plague of biblical proportions,’’ Brett says.

The belfry, which will be the boardroom, has been decorated with wallpaper featuring native kakapo and using all the church’s original colours.

The bell’s also been refurbished and put back in working order.

Meanwhile, the former lunch room’s being converted into a ‘green room’.

‘‘This will be like a 1900s hunting lodge with historic taxidermy, open fireplace, a circular pool table and a bar made from recycled rimu and some of the old church pews,’’ Brett says. 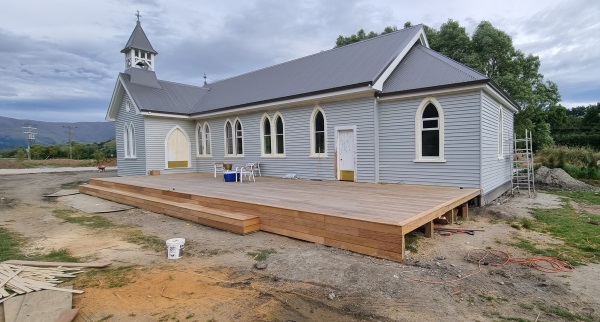 Although the building, due to be ready by February, will primarily be for offices — ‘‘we are desperate for the additional space and facilities’’ — he also has consent for temporary events.

A former muso himself, Brett’s tapping contacts he’s had to get some touring groups ‘‘looking for a more intimate venue space’’, and he’s already booked comedian Ben Hurley.

‘‘It’s been a while since I was gigging five nights a week in Queenstown, but I had to dust off my guitars [recently] and try out the acoustics in the hall — they are absolutely superb.

‘‘Most of our friends have young kids, like us, so we may pull down a theatre screen so we can screen movies from time to time for kids’ parties and get-togethers.’’

In tandem with the building work, including a new verandah, he and Hollis have also commissioned major landscaping.

They’ve also got the benefit of Mill Stream running nearby, where there’ll be riparian planting.

Their policy, he notes, has been ‘‘where we’ve come across something, we’ve got it done now and got things done right’’.

‘‘We’ve built the building to last 100 years, so we made a substantial amount of improvements.’’

As to what the whole project’s costing, he asks, ‘‘is ‘horrendous’ a number?’’, but is proud to have preserved a building.

‘‘We went through so many iterations of new-builds, it could have turned out pretty cool, but I just think on this location … it’s just going to be a nice marker point.’’

Congrats to Brett and his team of forever faithfull employees.
Some positively for the Queenstown area