Couples flock to resort to marry 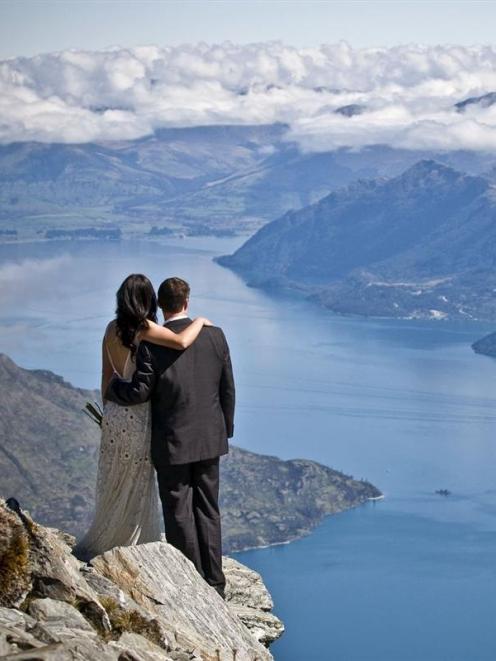 Romance. Queenstown is full of it and numbers show the resort is increasingly popular with couples walking down the aisle.

Wedding destinations in the area are quickly booking out for December/January, the busiest time of the year, but trends show couples are now choosing to get married in the winter more often than in the past.

Queenstown Wedding Association president Sarah Arkin says the town hosts well over 500 weddings a year, with most couples choosing to tie the knot in the sun.

However, she had noticed winter bookings for next year were increasing.

"One of the main trends is there has been a lot of winter weddings.

Weddings really go all year round."

In the past, December and January dominated the wedding calendar, with many others also taking their vows in April, as the autumn leaves began to change colour.

However, Australians, in particular, were choosing Queenstown in the snow for an idyllic environment for a wedding.

This year one couple returned to Coronet Peak skifield to marry after they had become engaged at the same venue the year before.

Another Australian couple will be hoping snow is forecast next August as they had booked their wedding ceremony for the top of the Remarkables.

They would then fly to Coronet Peak where both bride and groom will ski their first tracks as a married couple in their wedding attire.

"August is certainly one of the busiest months for us next year and this is a by-product of Queenstown being that year-round holiday destination." Ms Arkin said 90% of her clients were from out of town.

Queenstown overall was increasing in popularity for weddings as marriage licences taken up here increased from 363 in 2010 to 393 in 2011.

Ms Arkin said that did not account for those who took up their marriage licences in their home towns but married here, and estimated there would be well over 500 marriages around Queenstown each year.

"There is definitely a lot of weddings going on here in Queenstown."

Some brave grooms had even taken the initiative to plan the entire wedding, fly the bride over and surprise her on the day.

Most couples booked at least a year in advance. However, Queenstown was still a popular place for foreign couples to elope.

"A lot of them come over here who haven't told anyone and say 'Don't put any pictures on facebook or our family will see them'.

"New Zealand is a really easy place to get married. It takes less than a week to process a marriage licence."

Ms Arkin said weddings in Queenstown was a tourism industry in its own right and many businesses were opening their doors to become involved.

"More places are interested in doing weddings, because they are realising there is a huge market here."

She counted more than 100 businesses in the resort catering for ceremonies, receptions and other wedding-related functions.

The resort reaped a financial benefit when many of the couples return as it "becomes a very special place for them and so they keep coming back", she said.

"People aren't just spending money on the wedding. It's a huge part of Queenstown's economy."