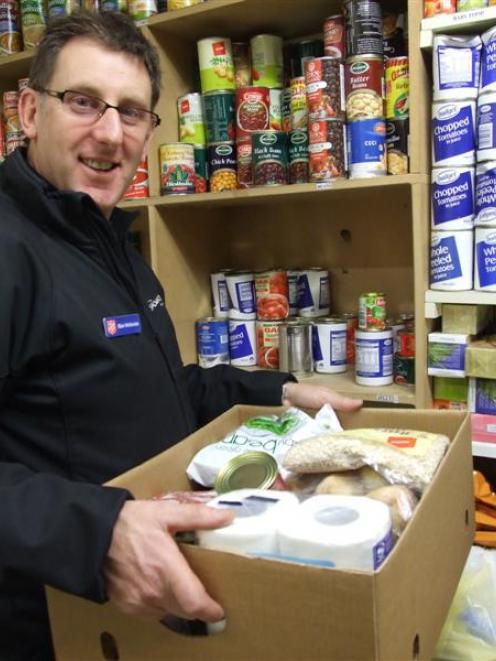 Salvation Army community worker Blair McKenzie in the Camp St store stocks up the Queenstown corps' depleted food bank which is available to all in need after assessment. Photo by James Beech.
The Salvation Army in Queenstown is appealing for donations of non-perishable goods to stock up its food bank, in the face of rising public demand.

Calls for food welfare assistance increased as soon as the cold weather set in and caused householders' expenses to soar, in a time of economic recession.

Salvation Army workers said they had to spend a lot more money to maintain the food bank this winter than they had budgeted, based on the needs of the community during past winter seasons.

Funds were also being spent to make up the shortfall in the amount of community contributions to the bank since Christmas.

"We are noticing more pressure on the food bank just from a local sense than previous years, without any added pressure from people flooding into town," Blair McKenzie, community worker at the food bank, said yesterday.

"There's families out there coming under financial strain from all sorts of angles and it's certainly tougher for different reasons, sometimes outside of their control."

Salvation Army statistics for Queenstown revealed that of the 217 clients who appealed for help in the year ending July 5, the majority, at 56.7%, were men and the bulk of those, at 30.9%, were aged 30 to 39.

The overwhelming majority of clients were "New Zealand European", at 62.2%, followed byMaori at 6.9% and British-Irish, also at 6.9%.

The Salvation Army welcomes donations of non-perishable goods such as canned spaghetti, baked beans, fruit and vegetables, plus pasta, rice and sauces.

Items could be dropped off at the counter of the army's outlet in Camp St.

Residents and visitors who sought support from the food bank met Mr McKenzie in person and he assessed their individual needs confidentially.

"Food is just one of the many ways we assist. Food is often the first thing they need, but it's a holistic attitude we have, understanding why they're hungry and understanding how else we can help."