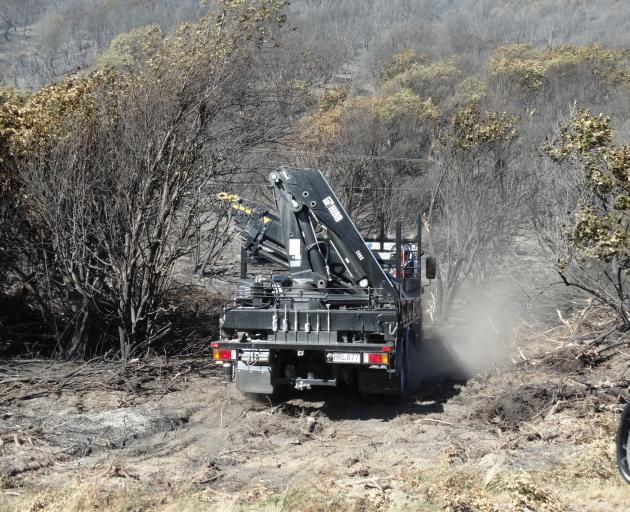 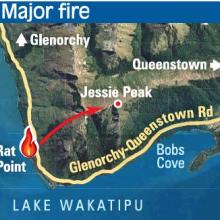 Power and access have been restored to Glenorchy and a huge fire largely contained after it razed 150ha of native scrub and closed the road for about 15 hours.

The fire began at the edge of Lake Wakatipu, about 5km north of Rat Point in an area frequented by campers, about 11.30pm on Tuesday.

It quickly jumped the Glenorchy-Queenstown Road before ravaging the face of Jessie Peak, burning through very steep scrubland.

Fire investigators have begun their inquiry at the scene today to determine the cause of the blaze.

The power was cut about 1.30am yesterday after the fire burned through ''multiple power poles'' over a 1km stretch.

Crews from Delta worked overnight and restored the power connection about midnight on Wednesday, earlier than anticipated.

Ten ground staff monitored the fire overnight and helicopters were on standby to respond today if needed. There have been no flare-ups since 9pm yesterday and 11ml of rain fell overnight, the Queenstown Lakes District Council said.

Two ground crews would continue to patrol the area today to fully extinguish the fire and ensure that hotspots are monitored and dampened down. A helicopter will also be on site to dampen down inaccessible hot spots, ferry ground crews and help with observations. 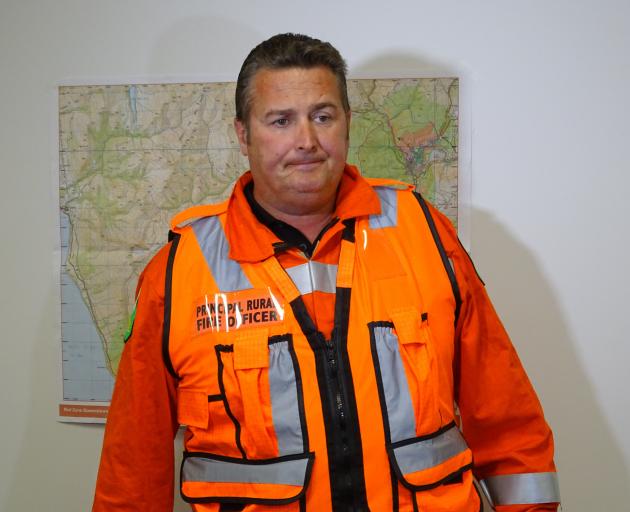 The fire, six times larger than last month's Signal Hill blaze in Dunedin, was yesterday attacked by 50 firefighters on the ground and eight helicopters carrying 1000-litre monsoon buckets. Crews would be rotated, as the operation was expected to last for three to five days.

Otago Rural Fire Authority Incident Controller Phil Marsh said the fire was under control at present, but crews still had work ahead of them.

“While it may look like the fire is out, our crews still have a lot of work to do to ensure it doesn’t flare back up and they will be working hard over the next few days to make sure it’s safe.

“The crews involved yesterday did an outstanding job and it’s a credit to their skill and professionalism that we’ve had over 50 people working alongside eight helicopters in a very demanding environment with no incidents or injuries.”

Mr Marsh said he was ''really, really happy'' with the efforts put in by all agencies involved in the response as well as the community.

“I want to extend a huge thanks to the local community for their support over the course of this operation. We’ve had offers of food and support from a number of businesses and it has been greatly received by everyone working to get the fire under control.

Mr Marsh warned the fire danger in the area was now high and the district was moving into a prohibited fire season. That meant no-one should be lighting fires in open spaces or at the side of the road.

Weather conditions were set to remain changeable in the area today, with sustained winds up to 25km/h, rain forecast for the afternoon and a high of 20degC.

Care needed on Glenorchy Road
The Glenorchy Road remains open but drivers are asked to take care when going through the area, as it is still an active operational zone and they may encounter fire appliances and ground crews working along the side of the road. There may be further road closures as monitoring work progresses throughout the day, the council advised.

About 150ha of native scrub and other vegetation was destroyed after a fire broke out at Rat Point, on Glenorchy-Queenstown Rd, late on Tuesday night and quickly spread. Photo: supplied

No camping signs at Rat Point

At a media briefing yesterday, Otago Rural Fire Authority deputy principal rural fire officer Jamie Cowan, of Queenstown, said it was too soon to say what had started the blaze, spotted by a farmer on the other side of Lake Wakatipu at 11.30pm on Tuesday.

The fire began about 5km north of Rat Point in an area used by campers. A local windsurfer told the Otago Daily Times camping was banned at Rat Point but freedom campers were frequently found there.

The Department of Conservation confirmed yesterday signs advising camping was prohibited at Rat Point and White Point were erected recently. Queenstown police are helping with the investigation.

Mr Cowan said flames quickly jumped the road - the only vehicular access between Queenstown and Glenorchy, Kinloch and Paradise - and ravaged the face of Jessie Peak (1000m), burning through ''very, very steep'' native scrubland, rising into rocky bluffs, and back towards Queenstown.

The face of the fire stretched about 1.5km along the road. The land was a mix of privately-owned holdings and conservation estate.

Firefighters from Luggate, Cromwell, Alexandra and Queenstown tried to stop the fire spreading towards homes at Bobs Cove, about 2.5km away, where police were put on standby to evacuate residents.

By 3pm the firewas ''largely under control'' and the road was reopened, only to be closed again at 4.30pm when the fire reignited. It reopened again about 5.15pm.

Many firefighters had worked through the night and were joined by a mass response at dawn yesterday. By 8pm the fire was contained, with a ground crew continuing to patrol the area overnight. Rain began falling about 8.30pm.

Police did an aerial search early yesterday after concerns were raised about three trampers believed to be in the area, but they were found safe ''a long way'' from the fire.

There was no indication yet of how much the fire would cost. However, a blaze on Cecil Peak which destroyed 10ha in March 2014 during a prohibited fire season, which was fought by rural fire crews and helicopters, cost $16,131, mostly for helicopters.

The 2008 fire which burned over more than 700ha of farm and Department of Conservation land near Wye Creek cost more than $700,000 to fight and included the use of 11 helicopters, three 10-tonne diggers and more than 70 people.

An independent review found it was most likely caused by two passing steam traction engines.