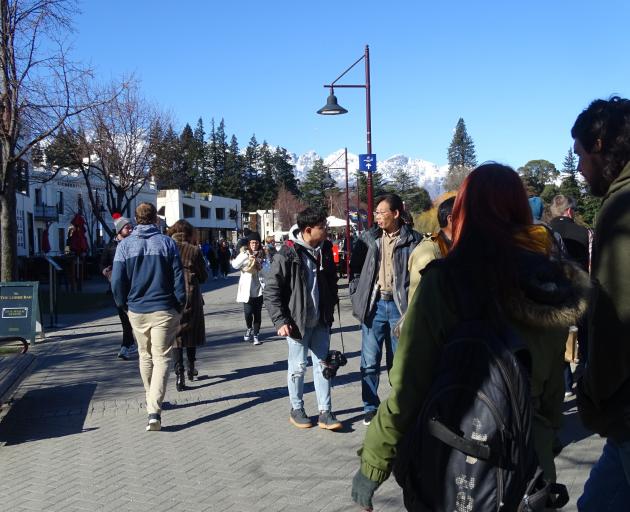 Visitor numbers in Queenstown this winter are up slightly but the growth is significantly down on previous years. PHOTO: TRACEY ROXBURGH
Destination Queenstown chief executive Graham Budd says despite a seemingly quieter winter in the resort, visitor numbers and spending are still growing, albeit at a slower rate.

For the past five or six years, Queenstown visitor numbers had grown at 8% to 9% year on year.

However, there had been signals for about 18 months the exponential growth was going to slow and that was now happening.

"It's been coming for a while now and what we're talking about here is the rate of growth slowing, or maybe even going down to zero ... but, we're at a significantly higher level of visitor numbers and spending than we were," Mr Budd said.

"We've got to remember that, as well - it's not like we've fallen off a cliff."

At present he was finding it "very difficult" to get a consistent picture about what had happened this winter. Some hoteliers had said their June and July numbers were strong, in some cases up on last year, while others reported being down.

While late snow had affected people coming to Queenstown, the Milford side of the business was up.

"In general we're not in negatives, but we're definitely not seeing the growth we've seen in the last few years."

Farelli's Trattoria manager Erica Wymore said while school holidays, in particular, had been busy, the restaurant had been "a little bit up and down since then".

Meanwhile, Bunker, Attiqa and Sundeck bar owner Cameron Mitchell said so far this winter had been the strongest in a couple of years.

"I'd say that's more to do with the demographic that's here this year, more so than anything else.

"I think there's possibly this year less of the ... backpackers and more of the well-heeled travellers.

"We've had a good winter so far - better than the last couple."

The Commercial Accommodation Monitor for June shows Queenstown had an increase of 7000 guest nights, or 3.1%, compared with June 2018 - the fourth largest increase in New Zealand.

Mr Budd said while Queenstown could go "flat" for a season, it was important to learn why, particularly in the key Australian market, where there had been slight growth this year.

"We need to understand, for winter in particular ... if our proposition has weakened.

"Has the appeal, or the proposition, or our premium positioning weakened relative to either their domestic markets, in terms of ski areas, or other markets - like Japan, for example - or is there some other dynamic happening?"

Queenstown Chamber of Commerce chief executive Anna Mickell said she was not "unduly concerned" about the visitor numbers this year and had not received any concerning feedback from the membership.

While the "double-digit growth" was not happening this year, more measured growth was not necessarily a bad thing, she said.

Mr Budd said the slowdown in growth was part of a cycle in play since the 1970s.

"Consistently, relentlessly, growth has been in our history for 40, 50 years, and it's likely to continue."